As the recent TEDxBeirut event aimed to bring us ‘From Limitation to Inspiration,’ it followed the TED mandate to spread ideas that would inspire action, by encouraging social entrepreneurship in Lebanon. 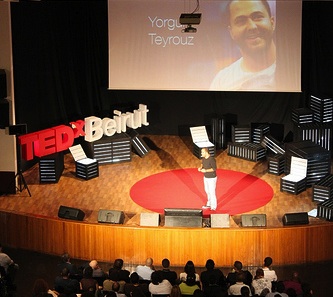 One speaker, Yorgui Teyrou, conveyed the idea that you can turn adversity into something positive, particularly powerfull. He emotionally spoke of how it feels to cause a fatal car accident, the effects of his subsequent stay in the infamous Roumieh prison, and how this led to his aspiration to ‘do something good every day’ after getting out. On his fifth day of newfound freedom, he realized one way that he could immediately make a difference: his victim’s grandfather was in the hospital and needed a blood transfusion.  After donating blood, Yorgui realised Lebanon’s lack of blood donation facilities, so he set up Donner Sang Compter to raise awareness about the importance of voluntary blood donation. Since its inception three years ago, the blood donated has saved 12 000 lives.

Nothing so dramatic was necessary to inspire Hala Fadel. A simple question posed by her husband: ’Are you happy ?’ caused an existential crisis for the then 27-year old banker. She decided to quit her job and pursue an MBA at MIT. Inspired by the internet frenzy of the 1990s, she used her insider knowledge of the excessive costs incurred by the banking industry to set up Booleo. The MIT Business Plan competition recognised the idea’s potential and allowed her to succeed. In return, she decided to extend the thrill of entrepreneurship to other ambitious youngsters in the Arab World by joining the MIT Enterprise Forum and becoming the Chair of MITEF in the Pan-Arab Region. The resulting MIT Enterprise Forum Arab Business Plan Competition has since received thousands of applications from 17 different countries. Following the electricity jolt of the Arab spring, let’s replace political role-models with entrepreneurs, Hala challenged the audience. (To find out how you can follow Hala’s advice read Wamda.com’s interview with Hala here.)

This was the undercurrent of the day: finding new ways to tackle Lebanon’s social issues. Thus Katia Saleh passionately conveyed the potential of the first Arab web based soap opera Shankaboot to get people talking about intersectarian marriage and homosexuality, and Joanna Choukeir promoted the establishment of ‘Imagination Studio’, a brainstorming space where different groups will be brought together to solve issues of sectarian interaction. Ziad Abichaker, CEO of Cedar Environmental and the final speaker, strung these two threads together in his imaginative narration of his love affair with waste, and how to dispose of it in an environmentally friendly, and profitable, manner. 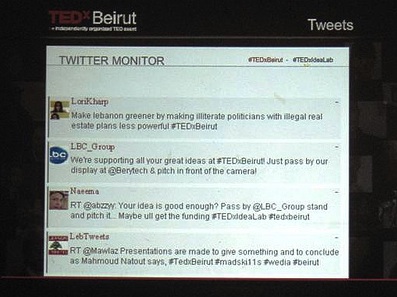 Off the mainstage, TEDxBeirut also aimed to be the first TED platform to get people to do immediately do something with their ideas. TEDxIdeaLab took ideas tweeted by participants and organised impromptu brainstorm sessions to see how they could be implemented. Of all of the ideas presented, the top two ideas- one for pop-up urban gardens around Beirut, and one for a blood donor recruitment initiative- are currently awaiting a decision to see who will win two months ‘incubation time’ at Berytech. Hopefully with this support, the creators will transform their ideas from paper into reality, demonstrating that no social issue is too big to tackle in Lebanon.