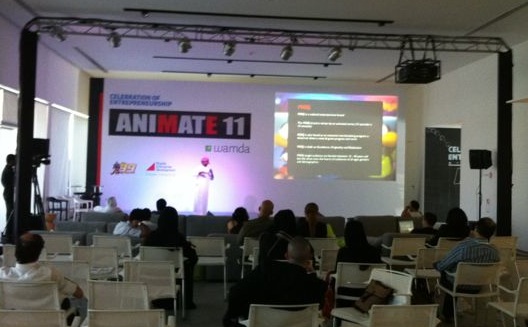 Amidst the angular but cozy sofas and wooden tables of The Pavilion Downtown Dubai, a range of animators with different agendas, histories and personalities took to the stage at CoE Animate 11.

Content-wise, as one might imagine, audiences were exposed to the gamut of CGI, 3D and Manga-influenced styles of animation, in which sentiments of an Arab Spring mingled with SciFi. Also present to delight was a contingent of personable Emirati producers: Mohammad Fikree (who you may not know yet) and Mohammed Harib (who you probably know if you’re an Emirati female between the ages of 14-40 who watches the cartoon series Freej.

Both of these Emiratis captured my imagination without sketching a single cartoon.  Fikree for one expressed his personality with every endearing introverted action, whether it was apologizing multiple times in advance for being liable to say “something dumb” on stage, or admitting that the life of creative workers can be depressing in the Q&A. His session proved to be one of the most captivating.

The two experimental short films aired, “Mad Camel” and “Girl & It,” are said to be derived from his dreams: both of them aptly dark and seemingly influenced in Manga, haunted with music that he himself composed.  Feel free to judge his talent for yourself (I personally don’t think it was just a coincidence that his showcase was sandwiched between great success stories):

It also came as a total surprise when the topic of financing and business came up. Apparently, according to Fikree, Emirati-owned animation houses want very little to do with Emirati animators. “They don’t trust us,” said Fikree, referring to the commonly heard idea that sometimes Arabs are the ones most likely to discriminate against other Arabs.  “They want to use their money to buy the best animators from Disney and other big name multi-national companies”.

The intimate crowd- less than 100- yielded a friendly Q&A discussion seemingly concentrated around Fikree’s artistic angst. One man in the audience suggested that he should stay positive and remain focused on his gems, since “it’s just a matter of time.”

Fikree, after all, is only 21 years old and has yet to complete his studies. Interestingly, one lady from the audience offered to meet with him after the talk to discuss an opportunity about working her upcoming studio.

Mohammed Harib, on the other hand, is, by now, a symbol of utter success, turning over millions of dollars in merchandising and licensing deals as a result of the wild success story that is Freej (see trailer below). The series, that is now being dubbed into English, Malay and other languages, actually came from a place of struggle perhaps similar to that in which Fikree finds himself. Harib promised the crowd that his story may have been even worse because it was situated “back in 2003 when the only thing in Dubai were huge multi-national media companies located in fortresses you couldn’t even get inside.”

“I say to Mohammed [Fikree] and other entrepreneurs in his place that they will need to stay positive,” continues Harib. “In 2006, I was short 1.4 million dirhams. Yet 10 days before Freej aired for the first time, Du agreed to sponsor us to cover the budget gap. Their sponsorship ended up extending way beyond this. But it began 10 days before airing! This is why I tell entrepreneurs that they need to remain hopeful.”

It’s worth noting, however, that in addition to this last minute sponsorship, Harib’s company was originally incubated at the Mohammed Bin Rashid Establishment for Young Entrepreneurs, who had dedicated up to 3 million AED towards the Freej cartoon series, now the most popular show in the UAE.

Many of the Arab World’s emerging talent attended this event, and one hopes that any surplus of positivity and wisdom circulated through the room anyone who might have needed it. With Mohammed Fikree in close touch with this tight knit community of Emirati content producers, it was reassuring to see him networking and operating within the proper circles, gaining inspiration and courage from his Emirati brothers and sisters.

For anyone who thinks that Emiratis have it easy, it would be wise to listen to those locals who are out there in the market, sleeves rolled up, perhaps not always available to share their story of struggle of hardship and dedication.

The UAE government seems quite determined to support its citizens, but an abundance of positivity and determination is nevertheless required no matter what kind of business environment one inherits.