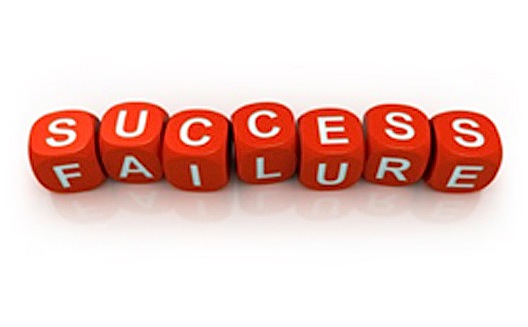 Failure is perhaps the most important teacher for any entrepreneur. Although failure is often treated as a taboo in school and university, where repeating a year or having to re-do courses causes our parents to look down on us, once we graduate and join the real-life work-force, failure becomes one of the main aspects of hands-on learning.

Often, entrepreneurs who failed before have a higher chance of success in their new start-ups, thanks to the learning they accumulated from prior failures. No successful businessman that I know has known success only without failure; most successful entrepreneurs have failed more times than they have succeeded. But the successes they achieved eventually compensated for all their prior failures. So, in my opinion, failure is one of the most important metrics by which an entrepreneur can gauge his progress.

Even investment vehicles structure their models by taking failure rates into account- so why shouldn’t we? A typical venture capital investment model estimates that 8 out of 10 portfolio ventures will fail or stagnate, while the other 2 will produce returns that compensate for the rest.

Over the past 10 years, I have had a similar return rate: I’ve been a part of seven new ventures, four of which failed at different stages, two stagnated, and one succeeded, compensating me for all the prior failures and more. Here I will share with you my failures, and the lessons I learned with each.

I started my first entrepreneurial venture in 2002, with my friend Mina Guirguis, who had the idea to start Zambaleta, an arts, music and entertainment resort in Egypt. We drew up the idea, gathered market data, and created a business model, and then entered the MIT Arab business plan competition. After reaching the semi-final round and receiving encouraging feedback, we wanted to launch the company and seek investment. After a lot of effort, we convinced a major Egyptian businessman in tourism and entertainment to take a look at our business plan during a car ride. As he sifted through the papers, he was initially impressed by the idea, until he reached the part that discussed our salaries and the percentage of equity we wanted to retain… at which point he opened the car window and threw the business plan out!

In the ened, my partner Mina ended up moving back to the US and starting the project as an NGO based in San Francisco, and we learned- powerfully- how to present better in the future.

2. Trying to Get a Free Lunch

Another failure of mine was my attempt to build a company to manufacture and distribute food products. I started the venture with a partner and booked “free” government land, in an area of Cairo called Maidoum in Bani Sweif, Egypt. We prepared the initial business plans and drafted potential financing partners… but what we forgot to look at were the conditions associated with this “free” land. As we reviewed our paperwork nine months later, we realized that the “free” land had operational conditions linked to it, such that the land would be taken away from us three months later! We eventually succeeded in returning the land, and unblocking the credit guarantees we had submitted to book the land, although not without with some financial losses. Fortunately our losses were not too heavy. Since then I have not missed looking at one single clause in any contract I sign, and I take contracts very seriously.

When I lived in Algeria in 2005-2006, I supported a friend of mine in starting up her own advertising and PR agency, VectorGraphics. The venture rose quickly, becoming one of the largest ten PR and advertising agencies in Algeria in less than a year. We made a critical mistake, however, in forgetting that the venture’s growth depends upon cash flow. We never bothered to look at the cash flow statement, ended up running short on working capital, and had to file for bankruptcy despite having signed a contract for $1million.

The second mistake we made was over-working my partner. She took on almost all of the sales and management duties, even though we had more than 10 other employees. Once she got married and went on maternity leave, none of the other employees came close to filling 10% of her role. There I learned the importance of building up an institution, rather than a company based on a single person.

My last example is a lesson from when I became a shareholder in E-Arabia, an agency that buys online ads and sells them in bundles along with other services. The company was simply over-designed- it had too many employees, an expensive headquarters, and heavy investments in marketing and PR that worked to place its ads next to other large firms in the sector. The company spent more than 200K LE (around $34,000) per month, while generating less than 25% of this figure in revenue. Of course it went bankrupt in under 2 years. We’ve since bounced back, however, and currently manage it at a much smaller scale with very little overhead.

My lessons taught me a lot; ultimately, the learning you make out of your own failures sticks far more than anything you will read in a textbook. My advice to entrepreneurs is this: take risks you cannot financially absorb, that would affect bringing home the daily bread for you and your family, but do try, and try again.