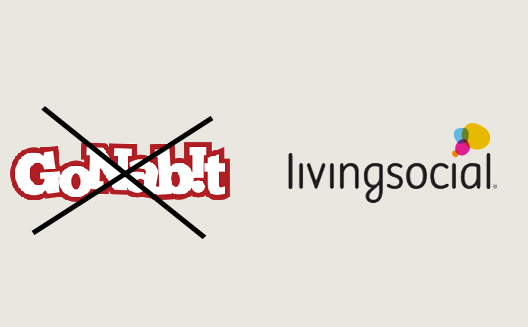 After announcing its acquisition by e-commerce giant LivingSocial earlier this year, daily deals site GoNabit will officially re-launch as LivingSocial this Tuesday, October 18th. The acquisition, made for an undisclosed sum, marks the biggest exit in the region since the sale of Maktoob to Yahoo in August 2009. GoNabit has been the first daily deal site to launch in the region, quickly expanding from Dubai to Abu Dhabi, Sharjah, Ras al Khaimah, Beirut, Amman, and Cairo.

The name “GoNabit” has worked well for the company in the region, despite not having ties to Arabic. However, the site was also the first to deploy an Arabic interface, making it easily accessible for non-English speaking users. While GoNabit will be generally retaining its team in Dubai, including co-founders Sohrab Johanbani and Dan Stuart, it will be interesting to see whether the name LivingSocial- and the perception of a global brand- enhances  or isolates the daily deals site.

As Dan Stuart prepares for the shift, he acknowledges that he’s reminiscing about the GoNabit brand today, explaining that the company he started with just a spreadsheet is becoming a larger, more agile animal behind the scenes.

“We've adopted the entire LivingSocial backend, from CRM to content management for our deals, and our staff has undergone training to make the switch,” says Stuart. As GoNabit becomes LivingSocial, “you’ll also see us launch more mobile-based deals that you can redeem on the spot day-of, and we're going to expand into offering more physical products- electronics, fashion fragrance, kids' toys- as we test our markets in the UAE, Lebanon, Jordan, and Egypt separately to see what appeals to our customers.”

Some things won’t change, however. “Localization remains a priority for us. We’re offering deals in Arabic and English from day one,” he says.

Annoyingly, users will have to re-register on the new site with their same email address in order to transfer credit. Yet Stuart says, from a privacy perspective this option was preferable to porting over usernames and passwords during the transition. “We’re very sensitive about information security. I'd rather ask our customers to create a new account than access their passwords.”

The acquisition marks LivingSocial’s expansion into the Middle East market, along with its entrance into Asia, with its purchase of Indonesia-based group buying site DealKeren and its parent company Ensogo, which operates in Thailand and the Philippines. The move positions LivingSocial as the fastest-growing group buying site in the region, in contrast to behemoth Groupon, which has faced difficulties filing for an IPO this fall. SEC investigation into its shady accounting practices caused the company’s valuation to fall to between $5 and $10 billion, leaving rival LivingSocial, valued at around $3 billion this April, more room to compete.

Stuart hopes to boost its position by enhancing the value of the LivingSocial brand. “Our goal is not to migrate literally and hope we can do just as well, but to have higher aspirations in terms of results and satisfied customers.”