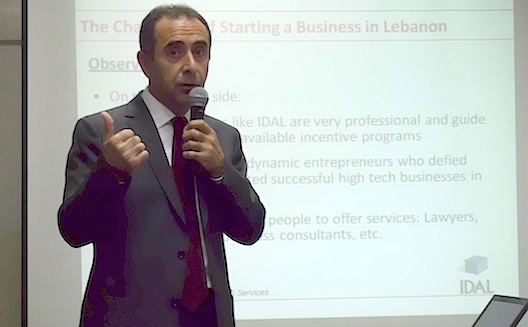 ‘Entrepreneurs are important because they create wealth for the society, and usually take less than 1% of what they create. Steve Jobs only took 0.001%. Furthermore they create economic regeneration and employment, specifically for youth.’

The speaker, Tony Bury, founder of the Mowgli Foundation, was preaching to the choir at the Entrepreneurs Forum, hosted at Berytech in Lebanon this Wednesday. The day was a relaxed affair, with budding entrepreneurs mingling with different partners willing to give them a leg up. In addition to consultants and support associations and programs, there were seminars on topics ranging from what makes an entrepreneur to how to become a technopreneur (technology entrepreneur) in just 30 minutes. At least two entrepreneurial hopefuls went home with prizes from the ‘Seed up your Startup’ competition.

Seed Up Your Startup

The event offered the opportunity to turn ideas into action, promising aspiring entrepreneurs the chance to win up to $25 000 seed funding, as well as hosting and mentoring from Berytech, if they could successfully pitch their start-up idea to a jury in just 3 minutes. Two teams left with a smile on their face, and the promise of further meetings to discuss their projects. The first was Gilbert Tegho, of Eecosolutions, a company aiming to make buildings greener, as current buildings produce 38% of CO2 emissions. This was Tegho’s first attempt to find funding. “I am looking to grow into the next phase, and would devote funds to marketing and sales,” Tegho told Wamda.

The other contenders, Sandra Salame and Francis Doumet, aspired to set up a learning platform called Closedbook. Inspired by similar self-education initiatives such as the Khan Academy, the duo aims to provide a platform where those willing to teach and learn can connect. “We had been talking about the idea for a long time,” Doumet told Wamda. “But we only learned about this opportunity a few days ago, and only submitted our proposal at 5 pm on Monday. If we are awarded the final award, it will encourage us to take time off to devote to the project and build the platform,” Doumet said.

For those not ready to take the plunge into creating a company, or who were just spectating, there was also plenty of general discussion, as many entrepreneurs shared the obstacles they had overcome. At one point, as if on cue, a power cut underscored the importance of taking Lebanon’s shaky infrastructure into account. Joseph Hage of Capital Banking Solutions (pictured top) focused his talk on overcoming such challenges, encouraging budding entrepreneurs to be aware of the financial help available through government incentives, such as IDAL. Yet, Fouad Zmokhol told a cautionary tale about doing so, describing how he moved his business away from the city only to discover that his operating costs soared because the area was not connected to the electricity grid. Explaining that he had to run his business on generator power alone, he reminded entrepreneurs to be plan ahead carefully when starting a business in Lebanon.

How to Become a Technopreneur

At the technopreneur seminar, developers managed to collectively build an earthquake locator application in less than half an hour, using Apple coding program Xcode. In fact, while the one member of the audience who knew Xcode coded the app, the rest of the audience listened to Elie Khoury, creator of the Dermandar Panorama app, as he explained how to make an application successful. Khoury illustrated that up to 70% of purchasing decisions are based on the icon alone, so it is well worth investing $200 to create a logo, or offer a prize in a design competition, which enables you to crowdsource the design process(one example is www.99designs.com). In terms of price, Khoury advised to always offer an app for free at first, and wait until it has 50 reviews and 10,000 downloads a day before making a paid app. Then, there is a psychological barrier of $3 per app, he said, so it is best to price an app below that.

As this session closed, even the bystanders at Global Entrepreneurship Week came away with a better sense of how to build the next big app in Lebanon.