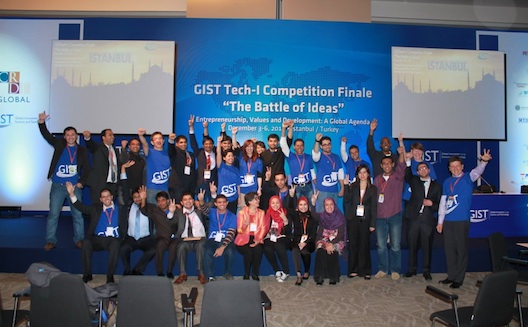 At the second Global Entrepreneurship Summit in Istanbul recently, we at Wamda were tremendously inspired by the contestants in the Global Innovation through Science & Technology (GIST) Competition, who came from all over the Middle East and North Africa to showcase their carefully-honed scientific ideas that could transform our societies.

From a battery that uses kinetic energy to recharge, to a process designed to extend the shelf life of milk using sliver nanoparticles, to brain-controlled prostheses, the ideas were aimed at fundamentally enhancing human life while protecting the environment and creating social opportunities. Students were not holding themselves back.

The competition itself invited applicants in 43 Muslim majority countries to submit proposals detailing their ideas for technology innovation, via a two-minute YouTube video. After their peers voted on the ideas, the top 25 came to Istanbul for three days of mentoring and pitch training, culminating in a pitch to judges.

The winners were two entrepreneurs from Lebanon, Najwa Sahmarani and Zyad Sankari, who won $20,000 for Cardio Diagnostics, a health device that monitors a patient's heart continuously to alert the patient and family members to potential predictors of heart attack.

The runner-up, James Khoo Chen from Malaysia, pitched a project called SecQme, designed to enable your security in urban spaces by leveraging social and mobile networks and contacting authorities in case of danger.

See the rest of the amazing ideas on the GIST website, watch a summary of some of the YouTube pitches in the GIST wrap-up video below, and stay tuned for one-on-one Wamda interviews with some of the contestants.