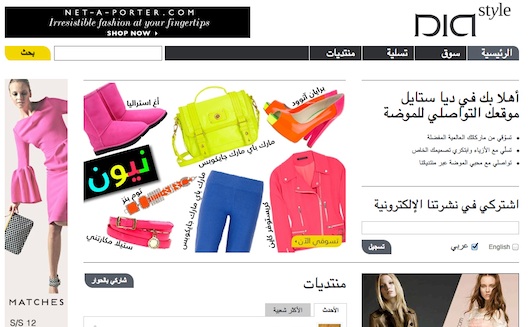 DIA-style.com's launch yesterday marked a coup in luxury goods e-commerce. The site has launched not only as the exclusive portal for online retail giants net-a-porter.com and selfridges.com in the Arab World; it's also launched the very first platform of its kind to be fully Arabic.

Boasting over 1,040 luxury brands and over 40,000 products for sale on the site, through partnerships with existing luxury retailer platforms, DIA-style.com's launch marks "the first time you'll find all of the luxury designers you were searching for, in Arabic," says founder and CEO Rasha Khouri.

Yet the platform, which also offers English, goes beyond simple e-commerce. On a section called "Play," customers can create a Styleguide or Lookbook, dragging & dropping clothing, adding text, and then creating an exportable image. In the future, the images will be able to be shared on Facebook and embedded in websites. In "Talk," women can discuss where to find items they're looking for and ask fashion questions to the community.

"By building DIA-style.com as a lifestyle fashion community, we're offering a woman of the region the opportunity to express her fashion taste, in Arabic," says Khouri.

With over 4,600 pairs of shoes on the site, women will have plenty of opportunity to express a preference. Selfridges, which has the largest shoe gallery in the world in London, has around  4,200 pairs of shoes, "so we're up there," Khouri laughs.

But Khouri clearly didn't built the DIA empire on a love of shoes alone. It's clear when chatting with her that DIA-style's first mover status in the luxury goods market in Arabic is not an accident; she's a savvy pioneer. After studying the luxury goods sector at Merrill Lynch and UBS in London, and honing her business model at INSEAD, she has carefully crafte every detail of the business, from overseeing the backend platform to honing the minimalist interface to giving her customers exactly what they want.

The launched of DIA-style.com marks the culmination of a vision she has developed over 5 years, and the second website launched by the DIA Group. In 2010, Khouri launched DIA-boutique.com to showcase and sell goods from independent luxury designers in the Middle East to the rest of the world. To create the platform, her team translated the entire Magento e-commerce open source platform into Arabic, she says, opening the door for other e-commerce sites that might want fully Arabic interfaces.

Now, by taking each item on the site and translating it into Arabic, not just transliterating it, she has essentially created the first Arabic dictionary for fashion terms, something other sites may also leverage. With this approach, Khouri is looking to cater primarily to the Gulf, bringing global goods into the region.

What's next is expanding her social media presence with sharable fashion elements, and then, of course, going mobile. "Most of the Middle East will jump into mobile, tablet, and smartphone use when it comes to accessing the internet, so that will play a big part in e-commerce development for us and in general moving forward," she points out.

The site will also be launching offline events in the next year. While Khouri built the platform using personal capital, she'll look for a round of funding towards the end of the year, to facilitate marketing efforts. Until then, customers can rest assured that the process of getting shoes onto DIA-style.com was entirely bootstrapped.