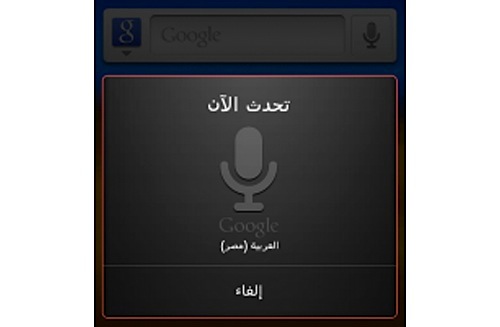 Developers throughout the Arab World should be excited- Google's quiet rollout of Arabic voice recognition continues to create new opportunities for localized apps.

Voice Search, an app which allows users to search by simply using their voices, launched in December but has now expanded to recognize speech in eight dialects, including, as we understand it, Jordanian, Kuwaiti, Lebanese, Qatari, Saudi, Emirati, Egyptian, and Palestinian Arabic.

"I've never been this excited about a product in my life," says MENA Product Marketing Manager Najeeb Jarrar, who was on the in-house team that worked for over two years to hone the app.

Google not only tackled a different algorithmic issue, from an engineering and linguistic perspective, he notes, but also built a product that will open up new ways of searching on the web and new opportunities for developers.

Here's how it works: when you click the search button, your mobile device records your speech as a sound wave, and transfers it to a Google server, where it is compared to billions of sound waves to determine its meaning. Your sentence is then parsed by keywords and compared to billions of keyword combinations. Google uses the best keyword combination to return the results to your phone, all in under a second, depending on your internet connection.

"It's as accurate as if you tried voice search in English," says Jarrar. Voice Search also works in Google Maps to return place results.

To maximize its accuracy, the team worked hard to make the app robust, testing it while having local native speakers read popular queries in a train station, in a public cafe, or near echoes, so that it could detect speech patterns despite machine or human noise.

The app, which runs on Android and a feature in the Google Search app for iPhone and Blackberry, will also continue to get more accurate as its learns. If it doesn't understand the user fully, Voice Search will offer a list of suggestions based on the closest matches, which the user can choose from, thus helping to improve future results.

Most importantly for entrepreneurs, Voice Search in Arabic will open up  to localize apps, make programs simpler to use, and increase accessibility for less tech literate populations. Because Arabic voice recognition is included in the Google Voice Search API, developers can just load the API and select the dialect of their choice.

Some of the ideas that I saw recently pitched at Startup Weekend Amman and QITCOM could certainly benefit. "Maybe we'll start seeing games where are playing simply by speaking," offers Jarrar.

Especially where those games or apps are educational- it would be great to see this space use Arabic Voice Search to expand flexibility when it comes to including different types of learners.

Demo below [Arabic]. The Google Voice application for iPhone is available in the iTunes Store and for Android as part of Google Play.