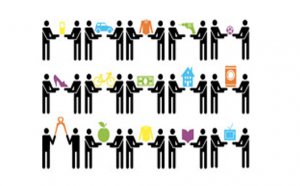 The founders of Internet startup Airbnb were accustomed to rejection. Joe Gebbia, Brian Chesky and Nathan Blecharczyk peddled to venture capitalists their idea for using the Internet to help people rent out a room, or even a couch, to frugal travelers. All of the venture capitalists took a pass. But after receiving funding as well as mentoring from incubator Y Combinator in 2009, the startup exploded. Airbnb the name was originally Airbed and Breakfast in a reference to the use of airbeds for guests has listings in 16,000 cities around the world and has booked more than two million nights.

What those early VCs missed was a burgeoning trend in what is now called "collaborative consumption." At the core of this trend is the idea that technologies like the Internet and smartphones can help consumers monetize assets that they own their home or car, for example in ways that were previously difficult or downright impossible. "There are two forces converging," says Wharton marketing professor David Bell. "First is the notion that it might be better to have access to something than to own it outright. And the second is the realization that people have slack resources. So that car you own may sit idle for 22 hours a day. The grease that makes the whole thing work is social media and technology, like iPhone applications that can create markets that didn't exist before."

A host of startups has popped up to tap into this movement, including Relayride and Getaround, which have created marketplaces to allow consumers to rent their cars by the hour. Liquidspace allows workers on the go to rent out workspace or a conference room for a day or even for just 15 minutes. Spotify, a European startup now expanding in the U.S., allows consumers to rent music rather than buy songs outright from services like iTunes. Gobble allows people to order meals from great home cooks in their neighborhood. And Snapgoods allows people to lend out, for a fee and on a short-term basis, gear such as photography equipment.

Of course, renting out one's home or car to a stranger comes with risks. Wharton professor of operations and information management Eric Clemons warns that the security measures associated with some of these sites may not be keeping pace with those risks. "My sense is that the enthusiasm in some spaces may be outstripping logic," Clemons says.

Case in point: Airbnb recently received negative press when a few consumers went public with stories of their homes being robbed or damaged by renters found through the site. Airbnb responded with a new policy where it will cover loss or damage from guests up to $50,000. In an apology note posted to the company's blog on August 1, CEO Chesky also announced plans to start a 24-hour customer hotline to provide safety tips for guests and hosts and to let hosts set parameters for bookings that include verified phone numbers and location information.

According to Kartik Hosanagar, a Wharton professor of operations and information management, such horror stories can spell real trouble. "What was a theoretical risk until now has actually played out. This is obviously highly problematic for Airbnb. Even though such events will be [very] rare relative to the number of good rental outcomes, a few such events can destroy user faith in the market. Another couple such events could have a drastic impact on the Airbnb user base. The company needs to come out and present a clear policy to protect renters in order to instill confidence."

For his part, Bell expects sites like Airbnb to address these problems effectively. "The key is to create a mechanism to encourage renters and [hosts] to be honest," Bell says. "This might include a reputational system [such as customer ratings] as well as a punishment mechanism should things get out of hand."

Despite the concerns over security, Bell believes the trend toward collaborative consumption can extend into any number of markets. "This could drill down to many other durables where the asset is large enough for the renter to be motivated to improve the return on that asset." And, he says, as the number of consumers who have used these services expands, it encourages them to try it in other spaces. "Once this is on your radar screen because you have used something like Airbnb, that may increase your tendency to try something like Relayride because it normalizes the whole concept."

No doubt the financial community is recognizing the power of collaborative consumption. Airbnb, after struggling to raise early seed capital, announced in June that it had raised $112 million from three venture capital firms, a deal which valued the company at more than $1 billion. And in early 2011, angel investor and entrepreneur Craig Shapiro started the Collaborative Fund, an investment vehicle for funding startups tapping into the collaborative consumption trend. "New technologies from advances in smartphones, GPS technology and social networks are enabling the sharing and exchange of all kinds of assets in ways and on a scale that was never possible before," Shapiro says.

Those investors are eyeing a market that is expanding rapidly. Car sharing revenues alone are projected to hit $3.3 billion by 2016, according to business research and consulting firm Frost & Sullivan. Rachel Botsman, author of the book, What's Mine Is Yours: The Rise of Collaborative Consumption, expects the consumer peer-to-peer rental market to become a $26 billion industry.

The catastrophic recession of the last few years is part of the force behind the move by consumers to tap into the value of assets they already own. In addition, these services typically allow people to rent out these assets at rates that are cheaper than mainstream hotel or car rental firms. "The economy is a big factor," notes Hosanagar. "People are really looking for ways to cut down on their spending. This is a great way to do that without dramatically changing your lifestyle."

The increased attention on environmental sustainability and reducing one's impact on the planet is also at work here, Hosanagar adds. "If you are driven by the sense that you want to decrease the total resources that are being drained, this allows you to do that. The product has already been made, and you are adding no more burdens through your consumption. That is very appealing."

While collaborative consumption as a term may be new, the system of sharing assets actually harkens back to an approach to asset utilization that was favored decades ago. "There was more sharing 50 years ago when communities were smaller and people knew each other," Hosanagar says. Collaborative Fund's Shapiro agrees. "Behaviors like sharing and renting have existed alongside ownership in various forms for decades. But over time, we have seen consumption and ownership rise steadily in parity with standards of living in places like the U.S., the U.K. and Europe." The emergence of what he calls "hyper-consumption" in those places in the late 20th century caused a decline in shared services in favor of ownership. Case in point the disappearance of laundromats as more and more consumers bought their own washers and dryers.

There were many early pioneers in this approach to sharing and reusing products. EBay was one of the earliest and most successful models, bringing buyers and sellers together from diverse locations. While the collaborative consumption trend focuses more on local sharing, the eBay system of reviewing and rating sellers is a key check in most of these new marketplaces. "Consumer marketplaces are highly anonymous, and identities are highly fungible," says Hosanagar. "The only way to make it work is to create a virtual community. And just as ratings were critical to eBay's success, they continue to be critical for these marketplaces."

Many of the initial players in the asset-sharing movement followed a business-to-consumer model. Think of Zipcar owning a fleet of cars shared by consumers, or Netflix providing a mechanism for customers to share its inventory of movies. What has emerged now is consumer-to-consumer sharing. And there is a major cost advantage here. Tomasz Tunguz, a principal with Redpoint Ventures, wrote recently that Zipcar spent 71% of its 2010 revenues acquiring and servicing cars. In the C-to-C market, the companies facilitating these arrangements have no such fixed costs.

While the trend toward consumers monetizing unused assets is picking up steam, Clemons says corporations have been doing this for years. For example, he notes, aerospace firms Boeing and Grumman formed time sharing computer services divisions as far back as the 1970s to allow government and commercial customers to tap into their computing capacity. Later, some companies looked for efficiency by outsourcing, selling off their internal computing operations in some cases and then buying those services from outside vendors. More recently, with the advent of cloud computing, Internet giants like Google and Amazon have made some of their massive computing power available to others. "This combination of monetizing assets when you can, or getting them off the balance sheet and then paying for them when you need them, has been motivating companies for a long time," Clemons notes.

The key to this trend, he adds, was diminishing transaction costs. If the costs and risks of handing over critical functions to outside vendors were high, companies didn't do it. But as more firms emerged to handle those tasks, and developed into trusted providers with proven track records, those transaction costs fell. The result is that over time, "companies did more and more outsourcing, and they became less firm-like and more market-like," Clemons notes.

This same decline in transaction costs is driving the movement toward collaborative consumption, according to Clemons. "The transaction cost essentially the hassle factor