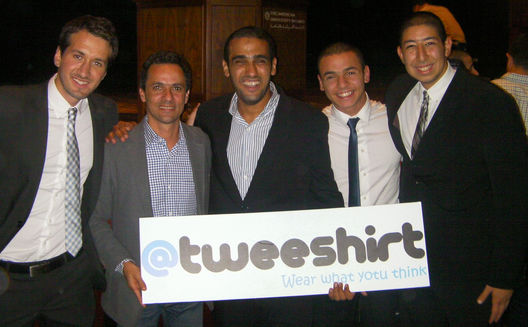 Hundreds of rowdy AUC undergrads cheered on as the MC presented the teams. There was cheering, a buzzing atmosphere, and plenty of laughs.  There was even the equivalent of a pitch invasion by the “Ultras” at the end, but this was no football match, we were in the Bassily Auditorium of AUC’s New Cairo campus. The evening of May 9th was the final ceremony of The Hit, the product innovation competition and Web TV show thought up by the American University in Cairo (AUC) Entrepreneur Society (ES) and supported by Souq.com.

These types of competitions are becoming very commonplace in Egypt, so what was new about this one?  The most obvious difference was that the grand winner here was voted for by the public.

“We’ve done business plan competitions before, but we realised that entrepreneurship can’t really be taught in a classroom or on paper, so we wanted participants to do something tangible and practical,” explained Youssef El-Sammaa, ES upper board member. He continued, “we were inspired by The Apprentice (the TV show) and wanted to do something similar. We knew Omar (Soudodi, General Manager of Souq) from the work he was doing with the AUC.  We spoke to him, and found he was already thinking of running a competition so we decided to team up.”

Omar takes up the story, “entrepreneurship is part of our DNA so we were glad to get involved.”  I told Omar that my impression of Souq was that it was mainly a vehicle for larger established retail stores. He replied, “Actually 30% of our sellers are 24 yrs old or younger. There was also a recent Gallup poll among Egyptian university students, and 24% said they wanted to launch a start-up in the next 12 months. In a similar poll in the US only 1% shared that vision.  It’s plain there’s going to be an explosion of startups and innovation, so now is the time for competitions like this to foster that energy.”

Nesma El-Far, another ES upper board member, joined in, “Omar and Souq have been much more than sponsors. They’ve been heavily involved throughout the whole process, mentoring the teams and us, and getting us a producer for the TV show. It’s been a fantastic experience for everyone involved, and for me it’s wonderful to be see The Hit start for a simple idea, to be standing here now with everything that’s been created.”

I asked them whether the AUC population as a whole had taken the competition to heart during the two months it’s been on. “Many times around campus I’d overhear students discussing the teams and ideas, and arguing which they thought were better,“ Youssef responded.  Impressive, considering the AUC student body is more associated with less serious pursuits. Not only that, but the website started off ranked around 22,000 in Egypt and rose to 4000. Their first voting stage got around 2,000 votes, and the final vote got over 4,000.

Back at the ceremony, the finalists were all backstage waiting for the final result. The teams were all filled with nervous energy, and there was a definite sense of camaraderie.  The shared experience had obviously created a bond between them.  The night progressed with speeches, videos, student bands, and a voting opportunity for the crowd.  The tension built as the votes were tallied, and when the grand winner, tweeshirt, was finally announced, there was an explosion of noise from their supporters.

The winning team jumped up and down on stage, fists pumping, over-size cheque for 50k L.E. waived high in the air. They were mobbed by around 20 of their friends, chanting and hugging, testosterone fuelled bedlam on stage.  The organisers were a bit startled, but everyone else appreciated the raw show of emotion.  It’s good to see beaming happy faces.

Once the euphoria dies the hard work starts for the tweeshirt team of course, they have to get traction outside their own community.  But it would be churlish to deny them their moment of glory, they should savour it.  And so should the ES team, the whole competition captured the imagination, and has undoubtedly spurred many students into considering entrepreneurship as a legitimate career option.  In footballing language, that’s a result.

N.B. Please see the related article for a detailed list of the final teams and their ideas.