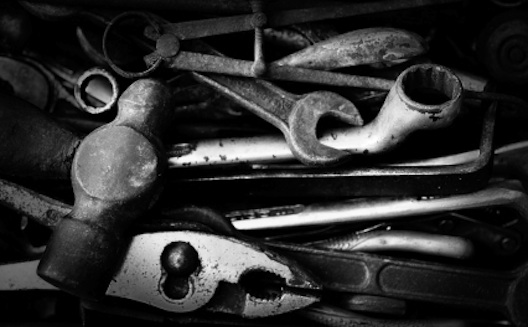 So how do you fit a cube-shaped canister into a cylindrical hole using only Moon rock plastic bags, cardboard, suit hoses, and duct tape?

I ask because if you were stuck in Space (hey, it could happen!) with insufficient chemicals to remove carbon dioxide from your cabin, then you had better improvise with what you have!

This is exactly what happened in 1970 when the Apollo mission operations team was able to fit “a square peg in a round hole” – using only the tools and materials the cabin crew had on board – and communicate the instructions to the astronauts, who then built the device that saved their lives.

Steve Jobs once said “Creativity is just connecting things”, and those “things” can be found in what innovators call a toolkit. In other words, a toolkit is a palette of raw, open-ended components that are made available to the average Youssef, who then sews the components together to create a brand new, personalised, product.

The open-endedness of a product is especially attractive to technology geeks, and Gutenberg was one such geek. When he invented the printing press, Gutenberg didn’t conceive an entirely new technology from scratch. What he did instead was combine pre-existing, seemingly unrelated pieces of technology – such as ink, paper, movable type and the machinery of the wine-press – and give them new functions. In Stephen Johnson’s words, “he took a machine designed to get people drunk and turned it into an engine for mass communication.”

Perhaps one of the most impressive recent examples of this kind of cross-fertilization is Johnny Lee’s Wii Remote hacks. Lee turned a low-cost gaming device into a sophisticated educational tool, a multi-touch surface, and a head-mount display. The ingredients? LEDs, a pen, a battery, glasses, the Wii Remote and some coding.

Many companies have adopted a customers-as-innovators approach by developing user-friendly tool kits that enable customers to design and build their own prototypes for experimentation. The idea is that tool kits avoid slow and costly iterations by putting the customer at the forefront of the iteration process.

So how can an ordinary startup benefit from this approach? First, put your anthropologist hat on and observe how people are dealing with the problem your business is trying to solve. Don’t ask, watch. Look for authentic struggles and stumbles, they’ll tell you a lot more than a survey or an interview ever will. Henry Ford said: “If I had asked my customers what they wanted, they’d have said a faster horse.”

Second, based on the insights you gained, develop a user-friendly tool kit that enables customers to design and experiment in a language they already understand. Make sure elements in the tool kit are flexible enough to allow divergent thinking. This will help customers explore the full range of your product and possibly come up with new applications.

Lastly, encourage customers to experiment with your tool kit on an innovation battleground. In 2010, Google launched “a place where creative and tech-savvy people can create videos to help the rest of the world understand all the newest and greatest technology out there.” Dozens of creative videos were submitted and millions of viewers watched and voted. Demo Slam was a success. A well-thought contest is like a public brainstorming session, an effective feedback tool and a smart advertising campaign all in one package.

There is much to learn from the customers-as-innovators approach. Most education systems in the Arab world focus on learning to be rather than learning about. What if, one day, a teacher walked into a classroom, and rather than presenting a physics problem on the board, presented a tool kit – just like Ed Smylie did with his NASA team of engineers – and announced: “We have to derive the equation for this swinging pendulum, using a camera and a ruler.”

Problems encountered in the classroom, no matter how relevant, will be forgotten if they remain theoretical and difficult to grasp. Students need to get their hands dirty. This will not only allow a better understanding of the problem at hand, but it will also foster new realizations. Cognitive frames can only be challenged in real-world situations that demand on-the-spot solutions.

The bricolage needs to continue beyond kindergarten, and students need to start working with real-world tool kits that enable them to rapidly run trial-and-error experiments, and access the “adjacent possible.” Only then will we produce a generation of critical and creative thinkers who are able to find sustainable solutions to real problems.