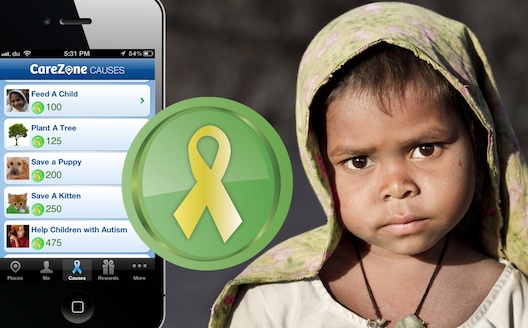 Editor’s note (NC): Sometimes a good idea does not find funding in an appropriate time frame. It could be a failure of execution, opportunity, team, or approach on the entrepreneur or investor’s side. In the case of Dubai-based CareZone, none of the above apply- it’s a unique idea that garnered the attention of several investors and respect from the community.

So why couldn't the project find funding, nine months after development? It may be an idea that was early for the market. The mobile platform, designed to offer shoppers rewards on their purchases, which they can then donate to charity or reimburse for gifts, is designed to serve those who want to give back to their communities. Founder Ritesh Tilani, who spoke to Wamda about the platform at Arabnet last, was realistic about the startup process, investing his own savings to build the mobile platform up from scratch.

But is 6-9 months simply too short a time frame for finding funding in the MENA region? It has not been enough time to become profitable, and scaling is currently a chicken-or-egg issue for the startup. Investors have been concerned about its market, profitability, and initial team of one. Yet Tilani intends to hire and grow the team once he secures investment. He has polled consumers and presented data to affirm the market need, but has been forced to confront the fact that investors’ wariness about the market traction has prevented the idea from scaling the way he hoped it would have by today. As he pivots the project into a new phase, he reflects on the reasons that it has been difficult to get funding, which other entrepreneurs may have perspective on (share with us in the comments). Here are his words:

CareZone was launched last August as a platform to reward users for shopping with businesses that give back to the community. In addition to earning rewards for themselves, users can select their favorite causes to directly benefit from their individual actions. We received phenomenal feedback from our users and required funding to grow our merchant network, market it to a wider audience, and make the service available on more platforms with new features.

I've been actively seeking funding for about 7 months, and it's been extremely challenging. Things move slowly in this region when compared to other markets. Some investors have drawn-out processes. Quite a few have behaved opportunistically; for example, I was asked to give up 70% of the equity in my very first investor meeting.  Others said they liked what they saw, but have still been non-committal for a variety of reasons. At the same time, it’s been refreshing and encouraging to see that there are a handful of supportive individuals in the investor community who genuinely care about nurturing the startup ecosystem in the Middle East and helping individual startups whether they end up investing in them or not.

In my experience, I discovered that investors appeared to be more risk-averse than I originally thought they might be, and I wanted to get a better understanding of what they were looking for. While everyone encourages entrepreneurs in the Middle East to be innovative and creative, innovation by definition introduces risk, since a concept that is truly new and disruptive will never be fully tried-and-tested right off the bat. Entrepreneurs have a responsibility to be innovative, but it helps if investors are also willing to fund innovation.

I've been focused on identifying smart money, looking at regional investors who can add value to CareZone not just with capital, but with knowledge, experience and networks. And it’s become clear to me that the ecosystem needs more avenues for financing for expat-driven early-stage startups.

If your startup is a tech venture or a social venture (or both, as is the case with CareZone), it can be difficult, as the majority of the small set of angel investors and VCs in this domain are looking for sure (or safe) bets in a tough environment. While tech is a hot topic, the nascence of the ecosystem makes experimentation with newer ideas difficult. Had I been building a clone of an idea that had been validated in another similar emerging market, it might have been easier.

CareZone is completely unique and original, both in its business model and its use of technology, and it is a solid product that has been validated in the market, gaining paying clients and building revenue, while offering benefits for causes. It won the award for 'Best New Business' at the SME Advisor Stars of Business 2011 Awards in November, which was a huge honor for us. GoNabit won the award the previous year, and we had tough competition from more established players.

It is by no means the perfect startup. I have been aware of investors’ concerns about the possibility that CareZone was too early for the market. To prove the product could be built to a high standard and that it had a market, I invested my own savings into building the first version of the platform and the iOS app. I generated an initial user base, who praised our efforts in ensuring a great user experience.

After investors started expressing their concerns about the single-founder issue, I created a plan to scale up the founding team. The plan necessitated funding, especially because attracting any talent in Dubai is made difficult by the UAE’s visa policy. Yet now we are actively recruiting a Director of Sales & Business Development, which is one of the key roles that will ensure CareZone has an extensive network of merchants signed up. CareZone now also has a well-respected industry veteran on board as an advisor.

A successful startup is one that is flexible and changes based on the opportunity, and CareZone will be no different. Based on usage patterns and feedback from our users, we will evolve and pivot if necessary. The good news is that we already have a scalable and robust platform on the back-end to allow us to do that. We currently have plans to open up our API and allow online retailers to leverage CareZone to reward their customers and give back to the community. We'll be building client apps for more mobile platforms as well, we’re considering white labeling the platform for individual retailers, and we’ve identified a number of innovative ways to integrate newer technologies into the CareZone platform.

We’re going to continue to persevere, in hopes that investment will follow. But no business that requires scale can go all the way without funding, and this applies to CareZone as well. The harsh reality is that difficult decisions will need to be made in the very near future with respect to CareZone’s continued existence if funding is not secured.

I am absolutely certain that we can build world-class tech startups here in the Middle East, startups that have innovation at the core. But we also need the investor community to step up to the plate. We need them to encourage us to think differently, and to push us to create new technology and business models that pave the way for others to follow.