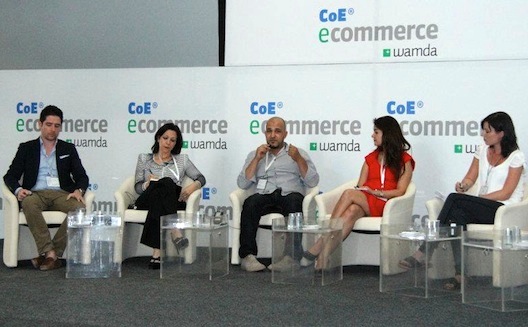 CoE E-Commerce, our CoE event focused on the E-Commerce sector, concluded yesterday after a second day jam-packed with "Wamdat" talks and panels addressing the biggest issues facing e-commerce today. Over 450 entrepreneurs and experts came out to enjoy the talks along with watermelon juice offered by Jordanian startup Batatee5 and nibbles by startup The Cakery.

To see what happened at the event, watch the Livestream footage and the videos of the session, which should be up at the beginning of next week. In the meantime, here are some primary take home messages.

At your e-commerce startups, you might now want to:

In the first panel, "Show me the Money, Part 1: Is Online Payment a Solved Issue?" panelists addressed the region's struggles with payment gateways.

The GCC is a $5 billion industry for online transactions, said Stephen Leeds of Visa. According to a survey by Souq, 90% of customers in the UAE according to survey feel comfortable buying online, said Ronaldo, CEO of Souq.com. But most of them prefer cash on delivery to credit cards or prepaid credit card solutions like those that CashU offers.

Some of the juiciest parts came after the session, as one member of the crowd voiced the question on the mind of many: Why are the fees so high for payment gateways in the region? A 4% fee at CashU really eats up profit margins, he said. Fares Akkad of MBC pushed further, asking "Does CashU really need to be that expensive?"

Martin Waldenstrom of CashU defended the platform's competitive prices compared to credit card options, and revealed that CashU is prepared to negotiate based on the industry and number of transactions a merchant can guarantee. Cyril Zimmerman of Paris-based payment gateway Hi-Pay came to his defense, saying, "When you come to a very early stage market, where the volume of transaction is fairly low, it's quite normal that the margin is fairly high; otherwise companies like CashU can't make a profit."

Still- it was clear that many in the crowd can't wait for the margins to drop in the region.

Before announcing Iyad Kamal handed out some great statistics on e-commerce that build upon data he shared with Wamda earlier:

3) Sell your company for half a billion (that's a b) dollars… using an orange website.

Ok, maybe your startup won't sell for US $525 million like online shopping comparision site Shopzilla did in 2005. Yet, its founder Henri Asseily revealed in a short "Wamdat" talk that testing of U.S. sites concluded that the best color for enticing users to shop was an "ugly" orange. "I hated it," said Asseily. "But it worked," he pointed out, extolling the virtues of A/B testing. "Don't be afraid to take steps to see what hasn't been done before."

4) Show investors the product… before chatting about the financials.

In the second "Show Me the Money" panel, titled "Investing in E-Commerce," it was refreshing to hear Pamir Gelenbe of Hummingbird Ventures talk about the increase in intensity and pace of work that he experiences upon leaving London and touching down in Istanbul. Hopefully that vibe will infect the MENA region a bit more.

James Chan, co-founder (along with Joi Ito) at Neoteny Labs, and Elie Habib of Riyada Enterprise Development, disagreed over the kind of pitches they like to see from startups.

Chan gets depressed by pitches that focus on the financials; he wants to see the product that will engage customers at the end of the day.

Yet after Elie Habib pointed out that looking at profitability is essential, especially in a new ecosystem, Chan urged a compromise: "Imagine what the next stage of investors would like to see," he advised startups. "It could be sales data, or specific traction. This way, entrepreneurs won't lose focus on the product or the money."

For more on the questions from the crowds participating with us in Beirut, Cairo, and Dubai, see our article on the Google+ Hangouts On Air.

The panel that I moderated, "The Hot Top Models of E-Commerce," came down to a faceoff between MENA's wildly successful site MarkaVIP (founded by Ahmad Khatib) against Turkey's flash sales giant, Trendyol (founded by Demet Mutlu).

In fact, all four companies on the panel (including Cobone and Mumzworld) took on large amounts of funding early on, making it clear that scaling is impossible without significant investment.

Yet after discussing the challenges of cash on delivery (with MarkaVIP revealing that they were solving their COD issues with Aramex, who has reduced their shipping prices for MarkaVIP by 60-70%, thanks to high volume), the panel came down to a face-off in which panelist had to toss out numbers in turn.

Khatib revealed that MarkaVIP's revenue was 6 million last month, and the average user buys from the site 9 times. He says that MarkaVIP is aiming to make $100 million in revenue this year, and the founding team still owns 30% of the company. (we want to know what their profit margins are though).

Mutlu responded that Trendyol shoots 6,000 pictures a day at their studio, and that the average age of her users is 26. She doesn't have to reiterate the fact that she has 5.8 million users- and growing.

Here, the rivalry seemed a bit like an old friendship- MarkaVIP initially sourced merchandise from Trendyol after all. But stay tuned for the rivalry to heat up as MarkaVIP enters the Turkish market and Trendyol enters MENA. You heard it here- it's happening.

If it wasn't obvious enough already, in the last panel, moderated by Arabnet founder Omar Christidis, panelists discussed how going online is key to retail success.

This was especially apparent when looking at the example of home shopping network station CitrussTV. 90% of his business is offline, said founder Michael Trueschler, but his growth rate offline is only 50%-60% per year, while online is growing at a rate of 15% per month, which, when compounded, would exceed 500% a year. "To be successful, you have to be online," he concluded.

The panel agreed that issues along the way that typically prevent business from going online include: 1) not understanding digital, 2) being afraid of the technical aspects, 3) the challenges of integrating online with your current business. Don't succumb to these fears.

7) In the digital content space, monetize with mobile apps.

In the final panel, on "The World of E-Commerce Beyond Physical Goods," moderated by Abed Agha of Vinelab, panelists discussed a shift into new monetization models for digital content.

While TV channels have been the dominant players when its comes to monetizing digital content space, by distributing through telcom channels, here panelists pointed to mobile apps and direct-to-consumer platforms as new routes.

Fares Akkad of MBC pointed out that it's tough to monetize music, unless it's packaged with a TV show, such as Arabs Got Talent or Arab Idol, where it can garner sponsorship deals, or launch lucrative apps, like Arab Idol's mobile app, which saw 1.5 million downloads.

Elie Habib of music streaming site Anghami offered up his model as an option; he offers users music streaming from an iOS app that is initially free but followed by a subscription model in which Apple to take a 30% fee on Anghami's app revenues. The model might be vulnerable if Anghami wants to move away from payment through the Apple store, but Elie claims they can offer alternatives quickly.

Karim Sarkis of SyncMedia pointed out that it's still quite difficult to monetize in the digital content space, because digital advertising is still very tied to TV budgets. This is what makes it easy for MBC's video platform shahid.net to turn a profit, while video content startups like Istikana and Cinemoz will have a harder time out of the gate.

For those who went, share your insights and take-homes with us. What surprised you? What did you disagree with or want to see more numbers on? What would you consider when starting an e-commerce business?