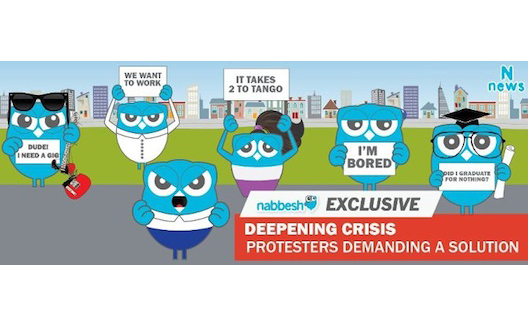 For freelancers looking for work, the Middle East can be a tricky market. While several sites, allow you to search for freelance work, only a few currently return more than 1 or 2 results, under pre-existing categories.

Yet Nabbesh, which launched in Dubai in mid-April, allows freelancers to search by skill set. This way, says founder Loulou Khazen, anyone looking for freelance opportunities can match their skills to jobs, without having to rely on a predetermined list of keywords.

This makes the site (Facebook, Twitter) especially ideal for women looking to start a family, students, and anyone looking for extra work on the side, she says, while it's also ideal for small businesses looking to fill gaps. The site now has close to 1000 users, 65% of which are women, and 60% of which are located in Lebanon and the UAE.

Khazen, who looks like a fresh graduate herself, despite having 10 years of work experience in marketing and finance, developed the idea when searching for part-time consulting work and realizing there was simply nowhere to go to list her services.

"There are many people who don't want a full-time job or aren't happy in their full-time job and are looking for opportunities. With some of the highest unemployment rates in the region, ranging from 28-40%, especially among youth, a new kind of platform is badly needed."

We've heard this rhetoric before from many sites- Laimoon, which aimed to solve the noise issue in job search by developing a specific match algorithm for sales and marketing jobs, Gradberry, which focuses on fresh grads, and tasmeemME, which focuses on freelance work in the creative sector. But here's what sets Nabbesh apart:

After collecting a lot of feedback in its initial beta phase, Nabbesh relaunched in late May with a new smart skill set search feature. Previously, listing "blogger" as a skill would not return jobs seeking "writers," for instance. Now, the site uses "skill labels," to lump similar skills together so it can return results for related skills within a given search.

It also offers autocompletion to suggest standard options, while still allowing job seekers to enter their own unique labels and differentiate themselves in the market.

2) A memorable and friendly brand.

Part of what stands out immediately about Nabbesh is that it has gone the extra distance to create a real brand presence. Where other brands create a catchy tagline and focus on social media marketing, Nabbesh has created an owl logo and persona that it deploys in cheeky faux-new-announcement cartoons on social media, maintaining a friendly, young, playful image.

The brand was carefully developed under Khazen's vision by Clinic21, a boutique agency in Beirut. Now, Nabbesh has taken the brand to the streets, handing out Nabbesh t-shirts and setting up cutouts, asking students to make funny faces as the face of the Nabbesh owl, at a recent career fair at the American University of Dubai and an event at Notre Dame University in Lebanon.

3) Fanatical attention to detail and debugging.

Companies often say that they are incorporating feedback quickly, but for user Rashed Al-Foudary, Nabbesh was the real deal. "I sent an email last night with a couple of suggestions, and they implemented it in a few minutes," he said over a written Skype chat. When I asked Khazen about this, she said, "Yep, last night we were up until 2am. He sent his bug and we were able to fix it right away." This kind of gritty dedication to iteration and competition demonstrates Nabbesh's promise- it's a small startup, but its founders are the types who will succeed at all costs.

When it comes to Al-Foudary, there's more to the story. When I first saw his glowing comment on Nabbesh, I thought it was a plant. I was inclined to ask him if Nabbesh knew him personally.

In fact, the Nabbesh team doesn't know him at all. Al-Foudary is a deaf freelancer based in Kuwait who specializes in forensic lipreading in both English and Arabic. He also works as an IT consultant for startups. When searching on Nabbesh, he was looking for an Arabic stenographer, which he wrote is like "looking for a needle in a haystack." He'd tried elance.com, guru.com, bayt.com, monstergulf.com, and freelance.com, but he liked that Nabbesh let him search by skill and was social media-focused.

He posted his job solicitation on May 9th, and just last week received a response, which for him was record timing, after searching for over a year and "visiting various locations in Kuwait and Egypt trying to unearth these mythical people."

For Nabbesh, the next challenge will be monetizing the platform. Of the standard monetization routes for a job search platform- charging for premium services or recruiter postings, whitelabeling- Khazen says she plans to monetize initially with advertising and next with a subscription model for premium services.

In the meantime, continuing to provide users like Al-Foundary with unique experiences that can’t be found elsewhere will make Nabbesh a startup to watch out for.