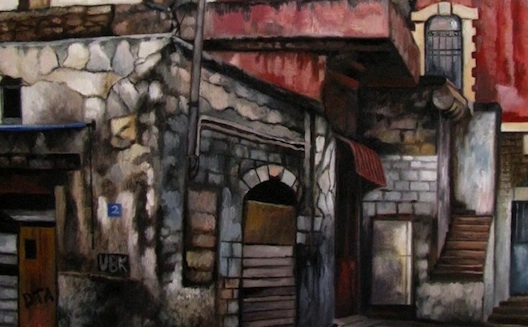 There is so much innovation, and so many amazing talented artists and designers in the Arab World. Why are they not getting the attention they deserve?" says Ehab Shanti, founder of the Amandala Forum.

To solve this riddle, Shanti launched AlHoush, an e-commerce platform that showcases art, fashion, jewelry, furniture, and accessories created by artisans around the Arab World.

The spirit of Palestine is alive and well in many of the works, not the least of which is Suleiman Mansour's classic "Jamal Al Mahamel," which portrays an old man carrying Al Quds (Jerusalem) in the shape of a lemon on his weary back. At the launch of AlHoush in Amman on April 29th, Shanti revealed that Mansour had painted an updated version of the classic that will tour around the globe under AlHoush's management.

While it may seem similar to Ananasa, an online retail site for handicrafts throughout the Arab World (whose founders were recently Entrepreneurs of the Week on Wamda), AlHoush is more focused on painters and photographers, and also plans to have a large offline component, launching a forum for art exposition in the Arab World in early 2013. The 10 day event will showcase over 300 artists from 10-15 countries and will be hosted in the an Arab city one year and abroad the next. To create an ongoing presence, AlHoush will also engage with local galleries in host cities to showcase their artists, facilitating artist connections with hotels and restaurants as venues as well.

While AlHoush is about building an inclusive community (also offering a few forums for art and design discussions), the site can't take on all of the artists that approach the e-commerce platform. When reviewing the 6-7 applications it sees daily, Shanti and Abdelhamid look at an artist's sellability, the degree to which they are creating something unique and innovative, and their potential to grow.

"One of the most heartening things I've seen," says Shanti, "is that artists that I used to work with, who used to sell paintings for $200, are now selling paintings for $10-15,000. Nothing makes us prouder than seeing artists grow and realize their full potential. We're investing our lives into this project."

It's certainly a promising initiative for anyone who enjoys art. The only lingering question is, will local customers in the Arab World want to buy art online? Or will global customers fall in love with the pieces enough to buy them from afar? The photographs on the site are compelling, and anyone looking for original pieces from the region will no doubt enjoy browsing these portfolios, but the offline component also seems critical for building buyer mass; often the more one is familiar with an artist's work offline, the more buying online simply becomes a welcome convenience rather than a risk.

Whether the e-commerce side skyrockets or the offline event becomes its dominant business, the site has already accomplished a feat by collecting and elegantly showcasing the region's talent and providing artistic entrepreneurs a chance to monetize their work.

[primary image by Maya Al Daya, as shown on AlHoush]