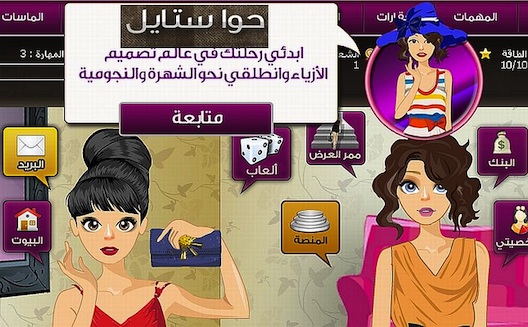 In April 2012, 1600 women gathered in Saudi Arabia for the second annual all-female Gaming Convention. “There was huge demand and many said they wished the exhibition would be extended,” says Tasneem Salim, the convention’s organizer. Feeling neglected by the all-male gaming events taking place in Saudi Arabia she decided to organise her own event, and 2012 just saw the second edition.

47% of all gamers worldwide are female, according to the Entertainment Software Association (ESA). “Women have purchasing power and it is shocking that they are being ignored,” says Salim.

The market agrees and some companies have exclusively been targeting women in the region. Yalla! Games Café, a tournament website for skill-based games such as puzzles, launched in 2010 in the MENA region to specifically target Saudi women.  Many social games already exist that target women; Social Girl, a US developed game which allows players to lead alternative lives and go on dates and shopping sprees, is one of Saudi Arabia’s most popular apps.

Yet developing the right game for the female market is tricky when most developers are male. “We think that there is a big target market in terms of targeting the Arabic speaking female audience in the Arabic language,” says Sohaib Thiab of Jordanian gaming company Wizards Productions.

However, when the company launched Hawwa Style, a Facebook game which allowed women to create their own shop online, they faced the obstacles of designing a game targeting females with an all-male team; they didn’t know what the consumer wanted. “We would have had to hire a female project manager,” says Thiab, before admitting that the company simply didn’t have the resources to do so.

This is why Candide Kirk, co-founder of Quirkat, another Jordanian gaming company, dismisses that approach. “You can only develop half the game if you are exclusively targeting at women,” she says, explaining that as you will only reach half the market you can only commit half the resources.

The female gamer covers a wide demographic, and is skewed to older women aged 55-60, says Kirk. Many wouldn’t acknowledge to being a gamer, but do admit to playing word games for example.  “They wouldn’t classify themselves as being a gamer, but they have the eyeballs,” she says. Proving how difficult it is to pin down the female gamer, Salim says the tournament with the most subscribers at her gaming convention was Call of Duty 3, a US fighting game. “Violent games were more popular than you think,” says Salim, adding that fitness games were also popular.

One way to ensure that females are targeted is ensuring that females help design the games. Salim says the lack of female developers is a big problem. Abdullah Hamed, the founder of GameTako, an online platform dedicated to promoting games developed in the Arab world, agrees. Hamed actively promotes female gaming in the region; he organised a workshop for female developers in Saudi Arabia this April. There were logistical obstacles to overcome, however. Due to Saudi laws enforcing gender segregration, Abdullah conducted his workshop in front of a blacked out audience to ensure he could not see the participants.

This is not ideal, but Hamed says that conservative societies are more likely to have more female developers in the region.  “We believe that they are more likely to adventure into a new professional field, whereas men are more pushed by our misogynistic societies to work in "safe" fields to provide for their families.”

Kirk, of Quirkat, agrees. The majority of her developers are female. Astounded by the available female pool of talent she did some research into the wide availability of female developers in the country. She found the reason was twofold. First of all, the Jordanian education system, your final grades determine in what course you will enroll in at university. Engineering is a sought after course, only open to those with top grades. “Women are overachievers,” she says, and thus are more likely to enter such programs. Upon graduating, they are also drawn to the IT sector due to family perceptions.  “Families see it as a suitable profession for girls from a conservative background, it is ok for their daughters girls to work in IT. The main reason for this is that the main interaction is with computers rather than humans,” says Kirk.

Players are the winners in this scenario; most local developers feel that having female developers on board will design an experience which will have greater appeal amongst men and women.  “When we are designing, because we are predominantly female, we design more intellectually stimulating games, more puzzle games, with aesthetics in mind that a female would appreciate,” says Kirk

“Women in most cases are less competitive by nature when it comes to games in general, in sports or video games, so we started targeting that demographic with more casual games, offering game plays that are less competitive in nature,” says GameTako’s Hamed. Taking into consideration the wishes of female gamers fundamentally changed game design and introduced new mechanics, he says. “Now we see more diversity in games than we used to see, but the challenge lies in creating such experiences and that’s why we are encouraging female game developers; we believe they can offer a breath of fresh air to game development.”