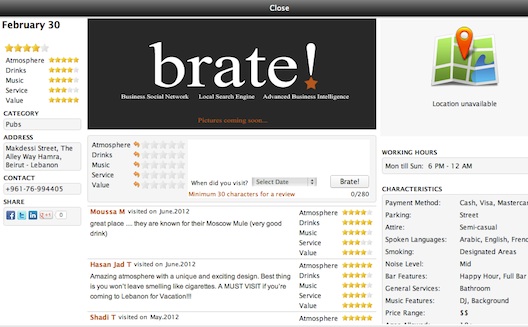 Local search engine Brate is aiming to revolutionize business search in the Middle East, say co-founders Shadi Tabbara and Sameeh Harfoush. Thus far the startup, which they call “a local search that accurately searches for businesses based on products and services,” has earned a place among the finalists for the MIT Arab Business Plan Competition this year.

After meeting in Saudi Arabia four years ago, the two conceived the idea for Brate - a combination of browse and rate – over drinks in Hamra, dreaming up a local search engine with a rating system and the possibility of adding live deals. To differentiate themselves in the sector, they decided to offer search not just by location and type but also by individual products and characteristics, such as “family restaurant” or “coffee.”

“One of the hardest things to crack was how to make a semantic search engine,” says Harfoush, one that can parse the meaningful elements from a sentence. Determining how to integrate two different search fields, one for business type and one for location, into one search bar, was a ‘hallelujah’ moment for the budding entrepreneurs. they recall fondly. The site now also boasts a mobile application.

The competition is stiff however. In Lebanon, currently the only market where Brate is operating, whereleb and Beirut.com also offer comprehensive listings of businesses throughout the city, while Beirutna allows restaurant search by food type, but not by individual product. Jeeran and Yelp! are major regional players that have both also launched mobile apps, with Jeeran's offering great user experience as well as Arabic (Brate is currently only in Engligh). Yahoo! local is tackling the space in the U.S., and there are over 100 regional and global players in the ratings space. Yet the founders are proceeding unfazed, citing these sites’ lack of sales teams on the ground.

Recently, Brate has taken steps to improve the rating system, based on user feedback. “We found that an overall five star rating wasn’t very relevant to users,” Tabbara says.  They now allow users to rate by more specific categories: food, cleanliness, and service.

Yet ratings remain an issue. Since the beta version’s launch in February, traffic has grown to reach 25000 pageviews from 2500 unique visitors last month. Yet only 20 are actively rating (or Brating) the 1158 businesses which are registered. “Today, we want to identify what people want, and change and adapt to their needs,” says Tabbara.

This may require several improvements. For one, the site may want to update the mildly 90s interface. They chose a light design on purpose so the site will load quickly, a feature that’s especially important given Lebanon’s slow internet. “We are twice as fast as global competition and 4 times faster than local competition,” says Harfoush. Thanks to its inspiration from Google’s lean result style, the site has few pictures, something they sometimes receive complaints about. Yet Brate could still update fonts and the rating icons while remaining simple. The mobile app as well could use a slightly jazzier search page.

Secondly, the search engine needs tweaking. An initial search for “coffee in Beirut Central District” reveals “Sky Bar,” a rooftop nightclub, at the top of the list. Sky Bar may serve coffee, but it’s hardly the most relevant result. One can click on “coffeeshops” to further refine the search, but then Brate hasn’t improved upon standard restaurant search sites where one searches by checking boxes.

The “semantic search” element could also use work; a search for “Jeans in Hamra” pulls up Gloria Jeans’ Coffee and two pubs on Jean D’Arc Street. Brate may only offer restaurants thus far, but a disambiguation question inquiring whether the user is looking for food or clothing could help; in this case “No results” would make more sense than listing a pub or coffeeshop.

Currently, the founders are planning two primary revenue streams: targeted online advertising, and a subscription model whereby companies can pay to list specific products, e.g. “jeans by Citizens for Humanity,” and receive analytics on product search and viewer trends. The last option may be the best, as it’s difficult to monetize in the region on advertising alone, and listing individual products will likely benefit Brate at the outset more than the companies themselves.

A third option may drive traffic to the site: businesses can add live discounts and deals to Brate for free, with no need for vouchers or a minimum number of buyers.  How well restaurant deals will work in image-conscious Beirut remains to be seen, but similar websites in the states, such as Tipcity, have been successful.

For now, the team is focusing on building the site, having recently subscribed to 5index, which will add 45,000 businesses to Brate. Tabbara works part-time, but Harfoush has quit his job and is working full time, hoping to expand the platform across the region.

Thus far, people are responding. “I love Brat,” says an old friend Tabbara runs into, who gives the pronunciation a French twist. “Thanks,” he smiles, leaning over to say, “It’s ‘Brate’, by the way.” 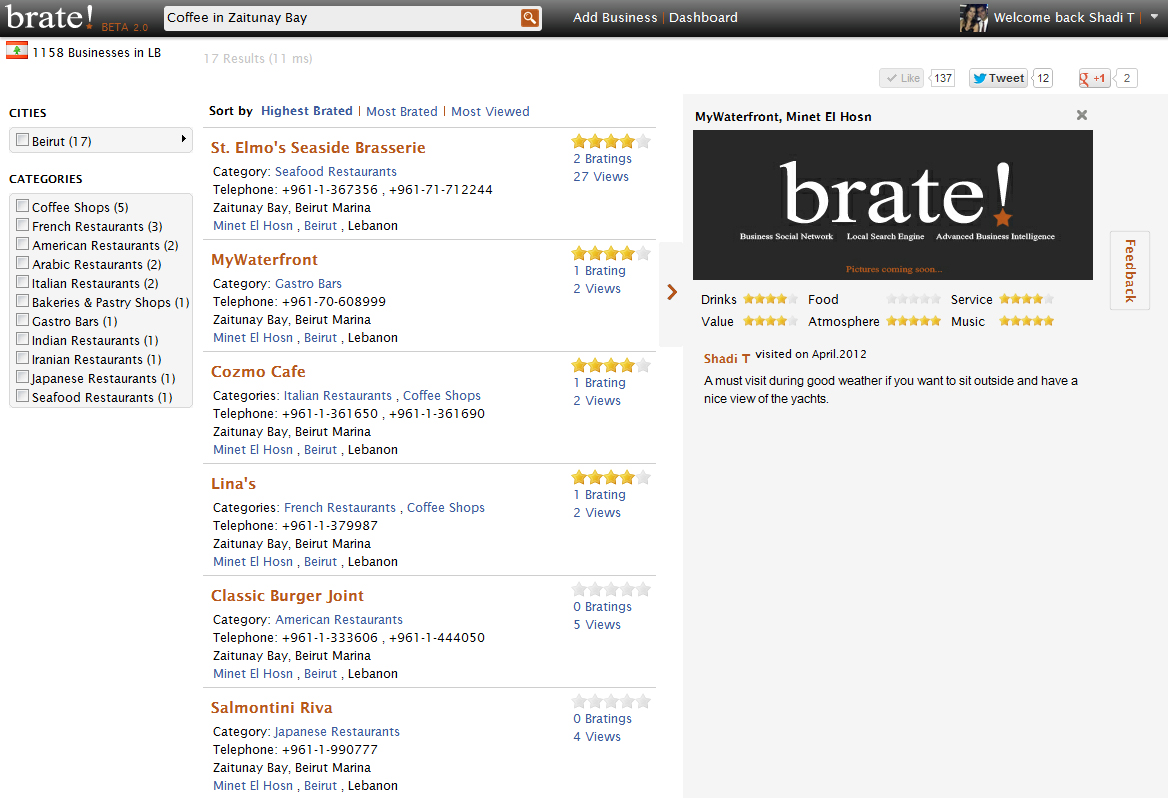 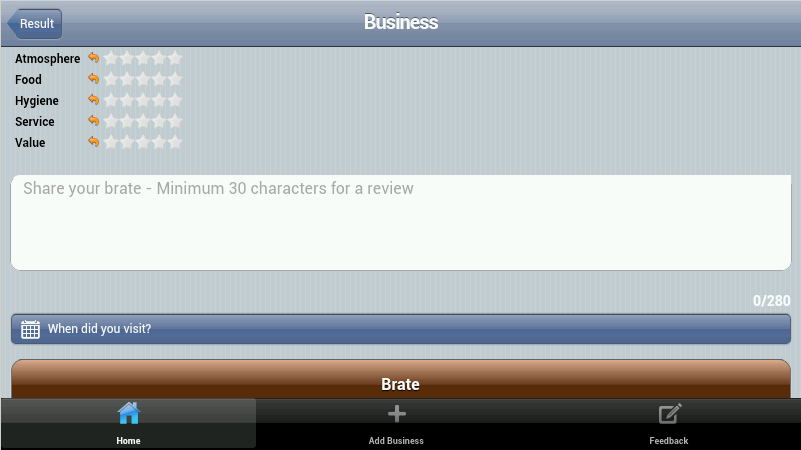 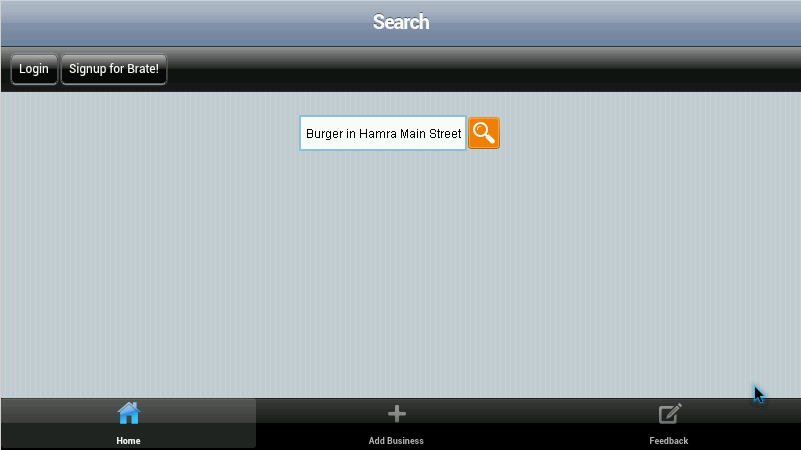 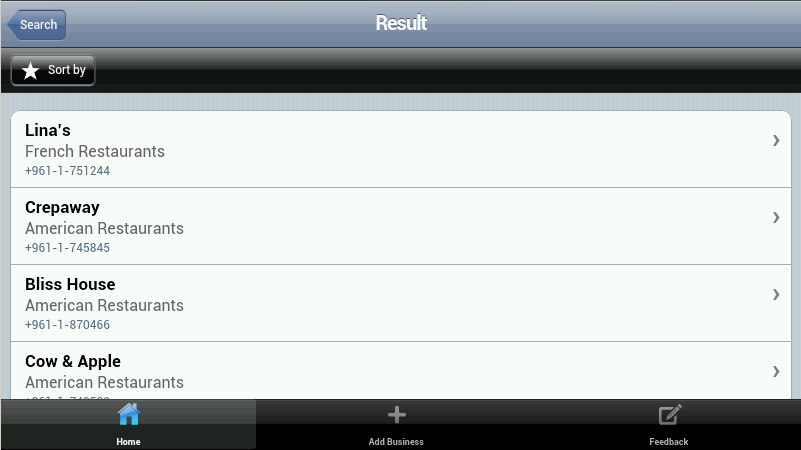