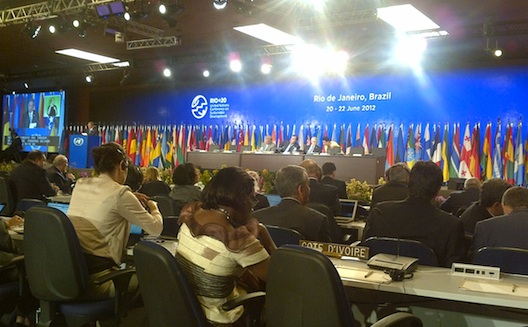 Twenty years after the original Earth Summit, world leaders gathered once again to discuss humanity's sustainable development. This time, however, the event- one of the biggest in U.N. history- faced a future with more challenges, less resources, and the notable absence of major figures.

The bustling and lively city of Rio de Janeiro witnessed this nine day conference, which brought over 50,000 attendees together to watch leaders debate and agree on the future we all want.

It was not an easy task; arguments can arise over simple facts such as how to share the planet. The conference’s major themes revolved around green economy in the context of sustainable development poverty eradication; and building an institutional framework for sustainable development to reduce poverty, advance social equity and environmental protection. While many would think that building infrastructure and social equity would be the most controversial topics, it was the issue of green economy issue that became the center of arguments.

"Capitalism is a form of colonialism," said Bolivia's leftist President Evo Morales while addressing the gathering. He added that commercializing natural resources is a form of colonizing southern countries, which carry on their shoulders the responsibility to protect the environment, which was destroyed by the north.

In addition, the absence of some prominent leaders clearly reflected upon the fact that sustainability is not really on the top of policy makers' agendas. Leaders such as Obama, Merkel and Cameron didn't attend the conference, although they had been in Mexico just a week before for the G20. On the other hand, over a thousand business representatives attended the conference, out of which 200 were listed in the Who’s Who of CEOs.

With more and more sustainability consciousness rising up within the business sector, big companies are feeling the pressure to implement sustainability in their actions, not just in their visions.  After witnessing some of the presentations by CEOs of PepsiCo, PwC, Unilever and Puma, one can tell how sincerely these companies are shifting towards building environmental sustainable markets regardless of whether governmental policies support them.

Most of the participants started arriving before 13th June, which marked the official start of Rio+20 activities, while the actual summit took place from the 20th-22nd June. With an exciting rate of over fifty events per day, choosing among events organized by countries, NGOs, private sector and civil society bodies all over Rio de Janeiro, or even just deciding where to go in the big convention center, "Rio Centro," was an important task to do early in the morning while enjoying a breakfast of local tropical fruit.

As a non-official attendee, it took me a little while to realize that maybe attending the plenary and listening to the statements by the heads of the delegations was not really the best use of my time. The amount of knowledge shared by leaders in the field of sustainability during the side events was incredible; however, a big part of the presentations was more like a domestic showcase rather than a universal thought.

As the end of the summit approached, more and more voices were raised against the 53-page document of conclusions titled "The Future We Want" (posted on SlideShare here), as critics called it a"weak addition to what was agreed on 20 years ago." Ongoing protests against the documents were mainly organized by civil society representatives who had actively participated in preparing them.

Overall, many experts believe that world leaders barely saved this conference from a major failure. Maybe the future we want should have less ambiguity, less talking and more action, but with such a lack of leadership at the international level, the private sector and the civil society must step in to empower sustainability.