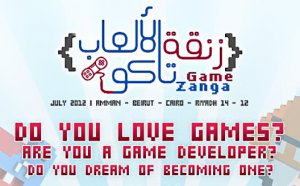 Game Zanga was a 72 hour gaming jam session that brought over 240 game developers together to develop 43 Arabic games, each with a “Liberty” theme. The competing games were chosen by online voting and announced on the first day of the Zanga. During the second day, professionals introduced the newest technologies and software packages related to game development industry, like the “ PlayStation Mobile” software from Sony.

The 43 games, which you can view here in Arabic, presented many different versions of “Liberty. as each team expressed their own depiction of freedom. Some games used the concept of freedom to mean being physically free, like fighter games, or games that involved liberating cities or hostages and defending the nation. Others took a broader interpretation, choosing to represent freedom of the mind and self liberation. Some also used 3D graphics, which added some excitement to the gaming experience.

The 43 games will be judged by a jury of Arab gaming news websites and professional Arab game developers, and the results will be announced in mid-August 2012- stay tuned. Meanwhile you can test all the games here. Let us know in the comments which games you love the most- we'll be waiting for your reviews.