Update: Minister Nicholas Sehnaoui announced today, Friday the 6th of July, that the internet got back to normal in all Lebanon, after two days of total outage.

Lebanon has been experiencing its second nationwide internet outage for the past two days, after the first one that happened for three hours on July 2nd.

Since Lebanon is dependent on one major submarine cable called IMEWE (which also passes through Pakistan, India, UAE, KSA, Egypt, Italy and France) to supply bandwidth to the entire country, any external upgrading or maintenance done to this cable would affect Lebanon's internet speed drastically, which is the case today. The other countries won't be affected nearly as much as Lebanon because they have access to many more cables than IMEWE. (Head to this Submarine Cable Map, pictured below, for an interactive view of how internet travels around the world). 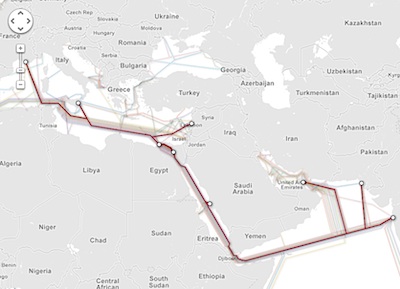 Lebanon is not completely bereft, however; CADMOS is another submarine cable suppling Lebanon through Cyprus that was not affected by the maintenance. However, CADMOS is exclusively supplying OGERO subscribers, and has been very slow, because of the pressure caused by the the IMEWE outage. The internet connection for all other subscribers to non-OGERO private ISPs in Lebanon has been completely cut off for the past two days. 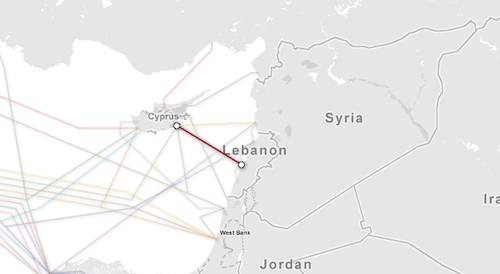 According to a tweet by the Lebanese Minister of Telecom Nicolas Sehnaoui, "Internet connectivity was lost due to an upgrade in the IMEWE cable which Ogero did not notify anyone about." When the minister uses here the word "anyone" he means the ministry itself and/or the Lebanese people. Ogero and the MoT are known to have a history of political conflict for several years now, which is affecting Lebanon's right to a decent and affordable internet connection, instead granting Lebanese internet the right to claim the "world's slowest connection"- behind Zambia, Vanatu, and Afghanistan. 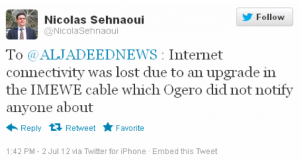 Mahmoud Haidar, one of the consultants at the MoT, mentioned in a quick chat with Wamda that by international standards the glitch shouldn't last longer than a couple days, yet "since there is a lack of comunication between the MoT, OGERO and IMEWE, we do not have more details to share for now."