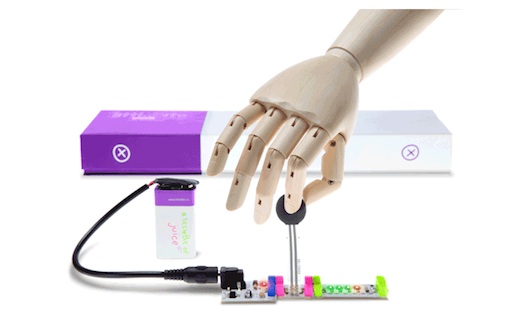 Lebanese entrepreneur Ayah Bdeir will now be able to bring snap-together electronics toys littleBits to a wider audience, thanks to a new round of $3.65 million in Series A funding from U.S. venture capital firms.

In her TED talk this March, Bdeir, who also co-founded Beirut workspace Karaj, explained the simplicity of the little color-coded pieces that teach children how to build and augment electronic circuits that connect via magnetic ends. “Instead of having to program, to wire, to solder, little bits allows you to program using very simple, intuitive gestures.”

She demonstrates how the pieces are as easy to use as Legos, and allow children (or adults) to make increasingly complex and fun circuits including lights, switches, sounds, motors, and, eventually, solar panels. “[Children] start to understand the electronics around them from everyday that they don’t learn at schools,” she describes. “For example, how a nightlight works, why an elevator door stays open, or how an iPod responds to touch.”

It turns out that the market is hungry for a simple electronics education. When Bdeir first put the pieces on the market last December, she sold 2,000 products in two weeks, and received interested from major toy companies, Business Insider says.  Now, she’s looking to use this round of funding to scale and start selling littleBits via supply chain provider PCH. Hopefully the pieces will eventually be sold in Lebanon and the MENA region as well.