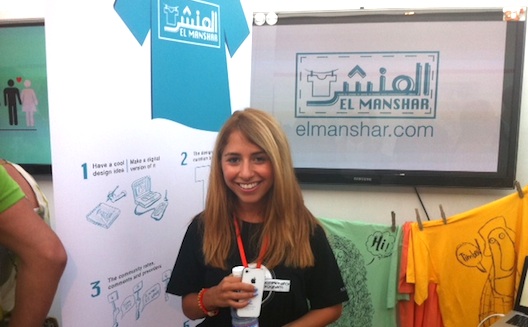 LivingSocial's recent exit made for good small talk, but hardly daunted budding web entrepreneurs in Lebanon this past Saturday night, as a crowd of over 300 gathered on the Seeqnce rooftop to watch the finale of its 2012 Accelerator Program.

During a healthy delay, we browsed booths where the 8 startups were set up, showcasing their products with flat screen TVs arrayed along the Seeqnce roof. Many of them had just finalized their ideas in the last few weeks if not days, having just completed a rigorous 48 hour hackathon as the capstone to a summer of project development.

When the program began in June, over 436 entrepreneurs from 30 countries signed up for the first three week selection phase, only to be whittled down to 30 by a challenging 8 weeks of tests.

"These final 8 teams succeeded through sheer tenacity and being strong-willed. What we put them through was intense," says Fadi Bizri, co-founder at Seeqnce, describing the first session of one-on-one interviews, the series of random team shuffles and 5-hour projects they had to complete.

By the end of July, the teams were finalized, and the typical nervous sweat that accompanies a post-Startup Weekend pitch seemed absent from their pitches.

"They all have good potential, and cover a wide variety of themes," says Bizri. "We've worked hard to bring them to an investor-ready level." He says Seeqnce itself injected $76,000 into each startup, a number we can only assume is part in-kind mentorship donation.

Seeqnce was, in typical fashion, hyping every element of its team and event, but its bravado generated an optimism that was needed in an ecosystem gaining confidence. They launched the Accelerator Program with a great deal of fanfare, and here was their moment to deliver. They did- the ideas presented were not revolutionary, but several showed promise. It was, as one VC pointed out, a similar caliber to those at Oasis500, a much larger accelerator in Jordan.

Overall, the startups (and many in the region) should scale back their projections; many projected revenues of around $1 million after a year or two. It would be great to see less emphasis on future projections and more simply about the product itself and some user testing.

But Seeqnce succeeded in creating 8 startups that will capitalize on ideas that have been kicking around the startup scene in Lebanon for awhile. And they generated energy that surpassed the geek population; young sparkly party-goers continued to trickle in, teetering in heels up to the front Seeqnce door after the final pitch ended.

Now, let's see some market testing and some bootstrapping on these ideas. Here they are, listed in pitching order, with some critique:

1. MedHP, a web and mobile application that would provide information on all aspects of the medical industry

Unique value: the startups plans to differentiate itself by offering a unique Q&A section, a rating system for doctors and medical outletsand by launching in both Arabic and English, in contrast to English-only sites like WebMD or Arabic-only sites like AlTibbi and WebTeb.

Concerns: To compete with AlTibbi and WebTeb, they're going to have to get some doctors on board- ASAP. Two have given their input on the app, but they need an entire network. Altibbi and WebTeb also already have Q&A sections, as well as symptom checkers, and prioritize Arabic to reach a niche market that won't default to WebMD; MedHP (who should also change their name) will have to decide who their primary market is.

2. elManshar, a t-shirt printing company and online community for arab designers to share and sell their work

Unique value: elManshar will allow designers to submit ideas which will be voted on by the crowd. Only chosen ideas will be printed, and those designers will be paid. It will compete with custom t-shirt printer Ooshi if it enters the Egyptian market, but Ooshi does not engage crowd voting.

Concerns: The product seems viable, but the designers get paid a $500 flat rate if their design is chosen; this could be unsustainable when the business is initially starting up.

3. Presella, a Kickstarter-meets-Eventbrite event service that allows small event creators to determine a set number of tickets that must sell before they put the event on.

Unique value: The team caters to a niche market that has not been tapped into in the Arab World, small-size event planners and artists who need to throw "risk-free" events. Presella make any money unless the total number of tickets are sold, in which case they take a 2.5% commission plus 99 cents per ticket sold.

Concerns: Presella is targeting low cost events with low margins. To be profitable, they will have to scale, and to do that, they will likely have to target a big market like the U.S., which they plan on doing after testing in Lebanon and Cyprus. It will be interesting to see if the model works in Beirut.

4. BaytBaytak, an online real estate solution for the Middle East that is both map-based and community driven.

Unique value: BaytBaytak (whose name is reminiscent of a pitch I saw for BaytBaytkum awhile ago) pledges to make real estate search easy, by gathering all of the real estate listings in a local market in the Middle East and adding them to a map, making user search dead simple. It has planned three revenue streams: premium placement, project listing, and broker membership.

Concerns: For it to work in this market, the BaytBaytak team might have to work hard to get local brokers' information on the site, staying current by staying on them, which will be labor intensive. It also remains to be seen if brokers will pay for premium listings. The site will also need a list-based model for SEO.

5. Et3arraf, an online dating site tailored to the MENA region.

Unique value: The site is in Arabic and offers three tiers of connection in its "Progressive Intimacy Sharing" model, which is designed to get users comfortable with the idea of dating online. All users have to answer 100 questions upfront, and unlike other sites, it begins by showing users blurry pictures of potential matches. Users must add their age, gender, and religion, and then can proceed to break the ice by answering preset questions. The platform allows users to request Skype and Facebook connections, but is designed to encourage exclusivity; it only allows a user to see 10 matches at a time, list 5 at the second level, and only see 2 at the very top level of disclosure. The site plans to charge less than typical sites in the region.

Concerns: The website is designed to approach "those who are having a lack of contact with the opposite sex, who are frustrated," the founder admitted. Some of the audience will undoubtedly face disapproving parents; whether that's a plus or minus when it comes to driving use remains to be seen, but use could have negative consequences for some women (although all dating sites in the region may face that issue). Also, will those looking to use a dating site take well to its limitation on the number of matches at each level?

6. Yoofers, a Kickstarter-like crowdfunding platform to help people raise money for things they want to buy without accumulating real debt.

Unique value: the platform is seeking out a niche that hasn't been present as much on Kickstarter: the niche of those who simply want to buy something or launch something they can't afford. To keep people from simply requesting donations constantly, the site generates a "reputation" for each user, encouraging that they build a good reputation by giving back to friends. The site is also offering a $500 prize to the person who brings the most users to the site.

Concerns: It seems a bit risky in Lebanon's status-conscious culture, but the founders say they plan to  target the U.S. market. Good idea, but it will still take time to get users comfortable with asking their friends and broader community for a few dollars for, say, day-to-day unsexy projects like car repair. But maybe targeting new mothers and the "startup costs" that a new child requires would be a good place to start when it comes to engaging a community.

7. Rikbit, an online platform that helps people organize offline outings based on interests.

Concerns: Two big parts of Rikbit's pitch did not quite make sense. One was that it was based on the "highly successful" Groupon model, a model which many of us suspect is a bubble beginning to burst. Secondly, its pitch kept insisting that its goal was to "show that the real world is still out there. And not only in a computer screen." This is, well, ludicrous on the face of it.

The pitcher also insisted that 99% of language on the web is "nonsense" (maybe we have different browsing habits), and lamented that the only way we make friends today is by clicking a button on Facebook. Yet he later on revealed that the platform would leverage social media to collect communities… Sorry Rikbit, the idea might be worth testing, but the reasoning needs work before you speak to investors.

8. Kactus, a hybrid to-do list application and crowdsourced tutorial, helping you to organize agendas in lists while also uncovering information about to-dos via a social community.

Unique value: This product was perhaps my favorite- it excelled in the user interface and general design. I love a good to-do list, and could see its crowdsourced element making it a unique product, completely separate from Remember the Milk or Astrid, as it works partly as a community board and partly as a to-do list.

Concerns: I found myself wondering if I could effectively merge my actual household to-do lists, which are usually private, with more public to-dos, which I don't have very often. Also, the idea of needing to crowdsource information about a to-do such as fixing a modem or getting mechanique done seems useful in Lebanon, but isn't as necessary in a large market like the U.S., where rules tend to be ennumerated (and followed or at least systematic). Yet Kactus will have to approach a large market to be profitable; it (smartly) showed no intention of sticking to the Arab World. It should at least be tested as a product.