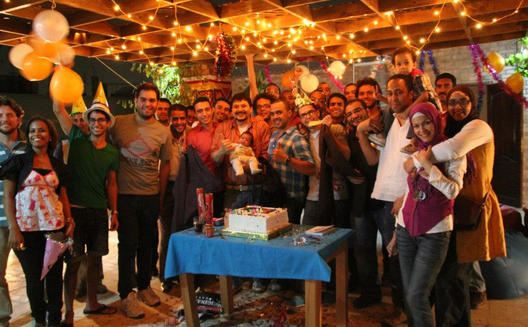 Six months is usually too soon to celebrate a birthday, but things had been going so well for The District recently that celebrations were in order. And what better place for a party than their roof-top terrace in Maadi, where friends and colleagues gathered for the festivities.

Being Cairo’s first small-business oriented co-working space has given co-founders Mazen Helmy and Ahmad Maher lots of highs and lows. As a Maadi local, I’ve been to The District many times, so I appreciated the invitation to join in the merriment.  It was also a perfect opportunity to get Mazen’s and Ahmed’s take on the journey so far, and what the future holds.

It wasn’t easy at the start.  Nearly every time they mentioned their plan to start a co-working space, they were met with uncomprehending stares, analysis offering variations of “it’ll never work in Egypt, are you crazy?”, or downright hostility!  Ahmed recalled one meeting with a potential investor (a well-known, powerful, old-school businessman, he says): “We’d been in his office for maybe 10 minutes telling him our plan. He stopped us, told us that it would never work, that we’d never be able to compete with him (one of his business ventures was in office-letting), and that we were fools and should get out of his office!”  We all laughed, although I could see Ahmed was still incredulous at the rudeness of the man, even after all this time.

So how did they make it work? "Well we had to create a community spirit. We wanted the people to come here and interact with each other, to cross-pollinate with people they wouldn’t normally mix with, and feel that by being here they had access to experience and human capital that they wouldn’t get elsewhere,” Mazen explained.  “We have a nice mix of people coming here now, freelancers and 2-3 person businesses, spread over many industries, from graphic design to IT to agriculture."

The age range, from mid-twenties to mid-forties, also adds a nice diversity, he says- "alhough we did have to ask one freelancer to leave, as he was consistently loud and obnoxious on his mobile and this upset the vibe.”  There is indeed a noticeably communal safe atmosphere inside, and many people I’ve spoken to have confirmed that this is a major reason they like The District.

The District's founders also been clever in positioning it as a Maadi entrepreneurial hub, by hosting various third party events focused on the small enterprise, from pitching sessions to women’s rights advocacy to leadership skills the Samurai Way.  They also host their own program of events, the most successful of which is the regular District Market, where small businesses sell their products in a quasi-traditional market setting.  “We’re entrepreneurs ourselves and are continually learning," says Mazen. "We simplified our charging policy by getting rid of the hourly and daily rates, which just weren’t suitable to the Egyptian mindset. We attended the co-working convention to keep in touch with the latest trends, we’ve been learning from our events here as much as our clients. Now we see ourselves moving more towards the role of an accelerator, so we’ll be providing more value added services to help our clients grow." One key example is the new District Lab, where the space will bring experienced entrepreneurs to mentor startups.

Business been booming at such a rate that The District should be profitable within a few months.  A new office has been rented in the same building to provide conference room services to outside businesses.  And they are now on the hunt for a new location in Heliopolis (Masr El Gedida) to open a District branch there, as they’ve had so many inquiries from that end of the city.  Both Ahmed and Mazen acknowledged that by opening a new branch they risk taking the momentum from Maadi, but they’ve been minimizing the risk by systematising as much as they can, so that the new branch has a proven blueprint to follow.

“It’s been hard writing down the processes of what we’re doing, because so much of it is unconscious and has changed over time, but it’s been very useful. It’s helped me focus on the business and how we work instead of getting trapped in ‘fire-fighting’ mode,” Ahmed said.

More fire fighting was to come sooner than he’d imagined though, as the birthday cake came out and the candles needed serious attention.