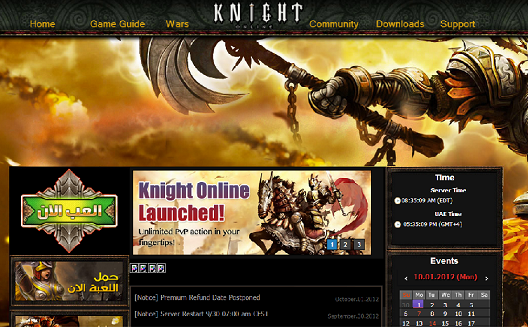 After publishing Age of Titans less than a month ago, Tahadi Games, is releasing another title, this time originally from Korea: Knight Online. This new MMO PVP pits characters against each other in a national struggle between humans (El Morad) and orcs (Karus), alloiwing users to play on teams.

The game was launched on September 20th and offers players a chance to challenge each other in an interactive online world arena.

While Tahadi Games once hinted that they would produce their own game, they now seem to have solidly stuck to being an in-region publisher for international titles. The region is still in need of a dedicated in-region publisher for local games; perhaps once the right game comes along, the twofour54-suppored Jabbar company might change its tune.

I spoke with Tahadi’s Digital Marketing Manager Adeel Ahmed and Product Executive Ergun Gundogar to find out more about their latest release.

What is Knight Online and how is it different than other titles Tahadi has published?

Knight Online is a PvP, player vs. player, game with an online community of users that play against each other in a fictional national struggle. We have never released a fully PvP game like this one; our other games are either first person shooters or MMORPGs. This is also one of the nicest looking games we’ve ever published.

How does the game work, can you explain the gameplay style?

Most of the features and content are focused on bringing players together to play against each other. All of the items, armor, and upgrades are designed to serve team of players; individuals can play against another as well as partake in larger team battles, including “nation wars,” “castle wars,” or “castle-siege wars.” Most of the game design draws form Eastern motifs with medieval weaponry and magic character abilities. Players can choose from four classes currently: warrior, rogue, magician, and priest.

Did you develop the game in-house?

No. We a regional publisher, so we get copyrights and licenses from developers and then publish games. Knight Online game was created by Korean developer MGame, and we have the rights to publish and promote it only in the region.

Do you usually use game developers from the Middle East and North Africa, or from around the world?

We don’t usually use regional developers; the developers we work with are often located in other parts of the world. For example, with Knight Online we are working with a developer in Korea. What happens is that we have the license to promote the game only in the MENA region. Knight Online has been launched by different companies as well, but they have their own territory; there is one company for Europe, one for America, and we are only allowed to promote the game in MENA.  But we are planning to host online massive battles between players in the Arab, Turkish, European, and American regions.

How do you market the games you publish, are you focused only on the region?

We are marketing Knight Online only in the region but, for games like Age of Titans, we have a license to publish to gamers around the globe. So depending on the game, we have a different license agreement. We generally focus on MENA, but sometimes we try to go global.

Why did you launch both Knight Online and Age of Titans within 2 weeks of each other?

Age of Titans in browser-based, so it’s a different game experience for regional gamers. Knight Online is downloaded on your desktop and has a much nicer and more sophisticated gameplay than any of our browser-based games. The PvP options are great, it’s much better than any game we have launched before and we felt that each of the games would reach a different type of gamer.

Has the game been popular? How many users have you attracted so far?

We have seen a great deal of users from Egypt, we are mostly targeting our marketing towards Egypt, but also Saudi Arabia, the UAE and other countries throughout the region. For many in the region, this is a new type of game. But we have seen a lot of people connecting on our Forum to share their experience and ask questions. We also have a community leader here designated to answer all of their questions and manage Forum inquiries.

Any teasers about what Tahadi has in store for the future?

There are a few games in the pipeline now, but we don’t have confirmation dates. I’ll let you know as soon as things are finalized.