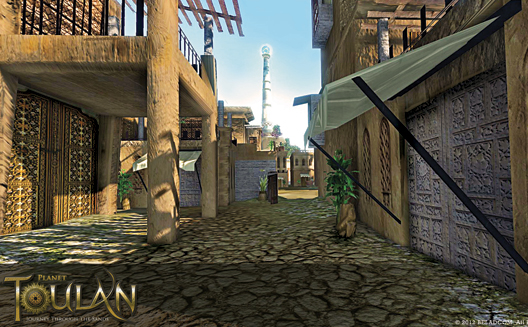 For awhile, I’ve been wondering why no gaming studio in the Middle East that I knew of was building a high-end video game on the level of, say, Call of Duty. Call it a personal bias, but I always thought it was a bit off that most action gamers I meet- both young and old- have been lusting after a game featuring American soldiers battling various enemies around the world.

Then I met Beladcom, a young team of obsessed game developers and graphic designers- both men and women- in Amman who are working studiously to build a lush, high-end 3D Arabic title called Planet Toulan.

Toulan is an ancient Arabic name meaning “extremely magical,” explains co-founder Mohammed Hujeij. Inside the game, players navigate a detailed world built upon the myth of 1001 Nights (Alf Leila wa Leila), he explains, where the protagonist interacts with jinns and battles mystical species in a quest to control Nawa, the lifeforce of the planet. (To explain the story and introduce the myth, the team released a series of online comic books, viewable on the Planet Toulan website).

In a quick demo, the land and cityscapes look incredibly detailed, with a lot of work put into rendering a set of Arabian ruins or the calligraphy on the archways of a city entrance. It has a soothing feel, with a day-night cycle that elapses over two hours; the game’s pace brings it a bit closer to World of Warcraft than something like Tomb Raider or Call of Duty.

I couldn’t test the mechanics of the gameplay, but I watched the founders demonstrate a battle with demons using items found throughout the game. They’re still heavily in development, they say, but it’s clear that the founders carefully obsessed over each palm tree and archway when rendering desert lands and a city by the sea.

Building 3D titles seems a natural step. Dubai-based Game Power 7 has been releasing 3D titles since 2010, but mostly localized Korean titles with a Japanimation feel. Beladcom is aiming to be the first to release an MMORPG with a fully native design and approach. “This is what differentiates us,” says Hujeij.

When Hujeij and his co-founder and childhood friend Talal Asfoura first came up with the idea for a 3D title in 2009, they spent a year strategizing and working on potential strategic partnerships, knowing this would be a crucial stepping stone for launching a viable title.

In 2010, they were able to secure a partnership with MindArk, a Swedish software company that built Entropia Universe, a 3D internet virtual universe that comes complete with an integrated economic system where players can buy “Project Entropia Dollars.”

“The deal took a lot of negotiating,” Hujeij confesses. “But ultimately they realized that they can access the Middle East market through Beladcom.”

It’s clear when interviewing the Beladcom team that they have a lot going for them; their team of both men and women are passionate and talented, and seem to love what they’re doing as they toss ideas back and forth in an office near Jordan University that they’ve turned into a bullpen of developer energy. The founders have also self-funded the game’s development, putting everything into their vision. 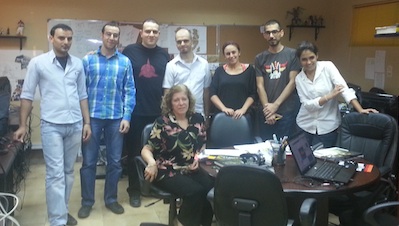 The obvious question is, will they reach players and become profitable?

Aside from marketing, the biggest stumbling block might be distribution. The game itself will be around 300-500 MB in size, and downloadable- probably not a concern for gamers with enough bandwidth, but perhaps a barrier in markets like Lebanon where young players pay dearly for their download quotas.

To increase the game’s availability, the founders will likely also distribute the title on DVDs, and they plan to target a broad market. Since Planet Toulan is a war game at heart, Beladcom is aiming for hardcore players, but the game also has built-in aspects for women, with quests that involve female protagonists and less violent agendas. With two women on the team- a developer and a creative officer- they have plenty of input on that front.

By going free-to-play, the team has also minimized the impact of piracy. As they built out their in-game purchases, they plan to continually release new elements within the game to keep it novel and exciting for players. “We will be listening to our players and building new content, new locations, and new tasks based on their opinions, says Hujeij.

When it comes to the recent censorship in Jordan, “we reject the concept,” says Hujeij. “It might only affect us indirectly, as content creators, but we stand united with our fellow Jordanian developers and are completely against it.”

Check out the teaser below and stay tuned for more updates once the game goes live in 2013.