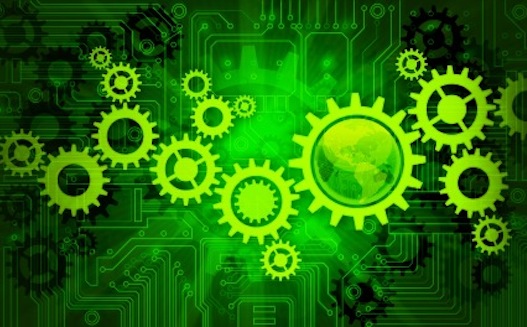 So you've heard of green buildings, green businesses, green products, and green living, but have you ever heard of green technology? If you have, are you clear on what exactly makes technology “green”?

We've come across a lot of people who had similar questions about “Green Technology”: what it is, what it's used for and if you're just now using it without even knowing!

Green technology grew out of the 1960's and 70's as a response to increased prices of oil, and the widespread realization that fossil fuels could be running out soon. The sustainability movement and green technology soon became intertwined as a way to not only insure a cleaner world for tomorrow, but also the idea of a civilization that was self sustaining, and not environmentally draining.

Contrary to popular belief, green tech isn't just about wind turbines, solar panels and alternative fuel, but rather the areas of its application extend to building construction, sustainable purchasing, and even green chemistry. Below are some remarkable green tech examples:

Here is an idea of what to expect in the near future of green technology:

Bolt-on Turbines: Wind turbines that work only on your home's ceiling.

Subway Power: Harnessing the power of the wind of passing trains to charge your gadgets.

Solar Leaves: Tiny affordable solar leaves that cover the surface of a building to convert sun rays to power.

These aren't just ideas, they're actually projects in the making, and what’s even more amazing is that these just scratch the surface. Will we be seeing flying cars in the near future too? Doubtful. But one thing is for sure: future technology is looking a lot greener.