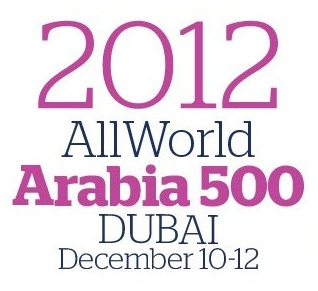 Yesterday, the AllWorld Network hosted a successful pre-event to the Global Entrepreneurship Summit in Dubai where they announced the fastest growing companies they identified in the Middle East, the Arabia500.

Over 400 entrepreneurs from AllWorld’s rapidly expanding global network came together to celebrate the 2012 Arabia500 winners, network with fellow entrepreneurs and to participate in the AllWorld launch of XChange, their new on and offline program designed to match companies around the world to build new partnerships and fuel new growth and investment.

According to their press release, “The Arabia500 are the largest collaboration of growth entrepreneurs in the world and their combined GDP is greater than that of 80 countries.  They are growing at an average of 50 percent between 2009-2011, ten times faster than the region’s private sector." The organization evaluates companies' sales growth based on audited financial statements and a detailed business survey.

Below is a list of the fastest growing company in each Arabia500 country as identified by the AllWorld Network. The growth rate is based off of revenue growth between 2009 and 2011: