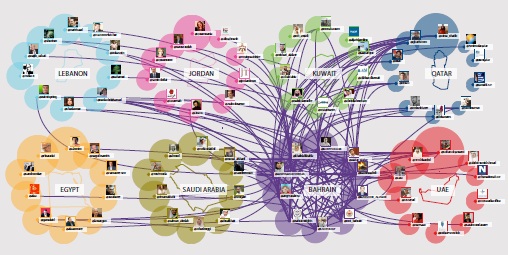 In summer 2012, Portland and Tweetminster conducted a study into the use of Twitter in the Middle East.

Using data collected between July and September 2012, Portland mapped the 500 most connected Twitter users in the Middle East and tracked their conversations. Portland has thus created a comprehensive map of the most connected tweeters and countries.

According to Portland, Nabeel Rajab (@NabeelRajab) is the most "connected" tweeter in Bahrain. Download or view the report in the grey box on the right to see the 10 most connected tweeters in Bahrain and how they connect to other countries in the Arab world.