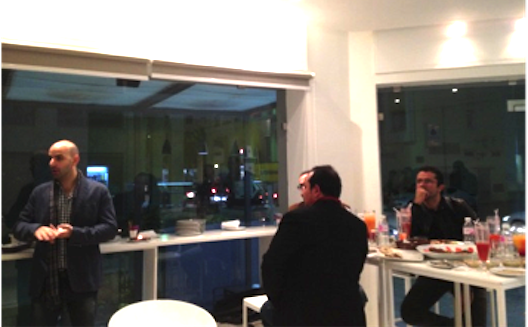 In partnership with the Global Shapers Tunis Hub, Wamda made its debut in Tunis a couple of weeks ago by organizing a meet and greet with Tunisian entrepreneurs. We were hosted by the local Lebanese restaurant, Comptoirs de Beyrouth- also a Tunisian startup- who welcomed us with great food and drink, creating the perfect atmosphere for exchange.

Around a dozen innovative startups in media, ICT, biotechnology and renewable energy came to the event, most discovering Wamda for the first time. While the Middle East often feels distant from our reality in North Africa, Tunisian entrepreneurs could benefit greatly from learning from other entrepreneurs throughout the entire MENA region. For the first time, Tunisians are straying from their traditional European and Francophone partners and opening up to the Middle East and the U.S. for business. It’s an exciting new era, but entrepreneurs are also still adapting and in need of advice.

Tunisian entrepreneurs are also constrained by an underdeveloped entrepreneurial ecosystem and a limited local market. Interestingly, what we heard from many of them at the Wamda dinner is that their biggest challenge is not the inaccessibility of finance but the unbelievable delays they face actually receiving their money, as well as subsequent limits on their spending.

This applies especially to those who benefit from public financial instruments and La Banque de Financement des PME (BFPME), the publically funded bank created to boost small medium enterprises. As a result, an entrepreneur spends 90% of his or her time chasing after their money through a bureaucratic maze of paperwork, rather than building a prototype our seeking out their first client. It is clear that innovative startups suffer from a lack of financing sources that are flexible enough to let them remain competitive. Innovation is also time bound; if it takes two extra years to start up because your money is blocked at the bank, chances are someone will have already beat you to the punch.

This leads me to another obstacle. Many entrepreneurs are hesitant to expose their new ideas for fear that they will be stolen. The local intellectual property office (INNORPI) provides limited protection, but the patents it issues are only local and done without any evaluation of competitors in the market. This is also a legacy of the Ben Ali regime, which was known to deny projects funding or support and then put the ideas on the market itself. As a result there is a pervasive lack of trust that tends to dampen the entrepreneurial spirit.

This is starting to change, slowly, with the explosion of initiatives in Tunisia, since the revolution, that encourage entrepreneurs to meet and share their ideas, their challenges and their successes. Entrepreneurs are also learning to accept advice from those who have gone before them. Still, many entrepreneurs are waiting to see concrete results come from these initiatives, such as real investment, exposure, and solid advice.

We in Tunis look forward to the next event to push this exchange further; to bring together those starting their business with mentors from around the region. Little by little, we will start to connect the “ME-NA” regional ecosystem of entrepreneurship.