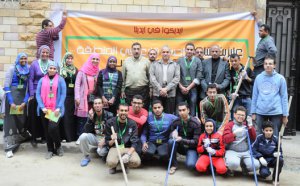 “Change starts in the streets," was a slogan coined during the Egyptian revolution, as demonstrators took pride in cleaning the streets in their neighborhoods. A month ago, almost two years after crowds first took to the streets in protest, they've founded Mante2ty (pronounced Mahn-tah-tee), an intiative to develop and revive local neighborhoods.

Their team of 30 begins by choosing a ‘local unit’ – a street – as a starting point, and then performing a slew of public services such as cleaning, lightning, paving, gardening and painting. The goal is not just to make the streets more sparkling, but to build trust between Mante2ty and the local population. Not content to come in from the outside or apply pre-determined models, the ogranization then distributes surveys to familiarize themselves with the neighborhood's critical problems. This allows them to design future projects and seek local funding. 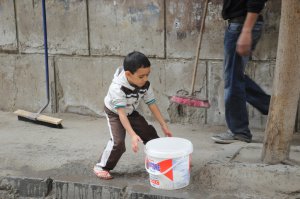 At first glance, you may think that the project is redundant with the work of local street cleaners, which number around 57,000 in Egypt. Since Mante2y also presents more efficient solutions to experts and policymakers, it might put some out of a job. However, the founders denied that this is an outcome of their work. “We are trying to offer help by minimizing unemployment rate in certain areas,” explains founder Youssef Hamdi.

Hamdi is a mechanical engineer who designs infrastructure networks and aims simply to “start a new trend in developing Egypt and making it a better place for the years to follow." This goal isn't limited to developing neighborhoods and printing flyers, but extends to changing locals behavior and sense of trust across Egypt, by bringing people together to participate in these projects and have a sense of local ownership and solidarity. 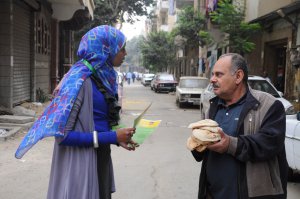 True to its vision, Mante2y's first project began by involving local leaders. On El Arish street in the Rawd Al Faraj region in Cairo, a particularly poor district that was burnt last Ramadan. The neighborhood's president Mohamed Abdl Nabi took a leading role, says Hamdi, helping to organize trash pickups from the garbage cans that Mante2ty puts in place, and promising to pave the streets.

Mante2ty also works to pressure groups that lobby Cairo's mayor for developmental solutions in these regions, says Mohamed Ibrahim, a veterinarian and developmental speaker who worked on the project. While pressuring the public sector, these groups also enhance transparency by logging these issues online. 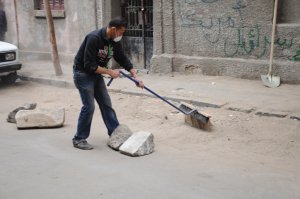 Mante2ty also hopes to implement a longer term vision to foster economic growth in Rawd El Faraj. The team plans to lease the rights to an old central marketplace and build a brand new marketplace with good security and low prices. Once it's up and running, the organization will give the management rights back to the neighborhood, keeping three kiosks and commercial stores under its own management. In keeping with the Muslim tenet of Waqf, or endowing property for charitable purposes, Mante2ty will donate a portion of profit to the market and use the rest to build similar markets in other neighborhoods.

The idea is spreading, as other individuals in marginalized areas, such as Helwan, Nahia, Imbaba, Faiyum, Dumyat and Asyout, look to apply the Mante2ty concept. A major appeal is the project revives the concept of Waqf, which was lost in our Arab communities when it became managed by the government in the early 60s. Now, Egypt's revolution is turning care of its streets back to local neighborhoods.