Ever since Ushahidi launched in Kenya in 2008 to monitor track post-election violence, crowdsourced maps have become a popular method of documenting and visualizing important data.

While Ushahidi quickly branched into covering the BP oil spill, the Nigerian elections, and Japan's earthquake in 2011, the platform’s open source technology, which leverages Google Maps, has been used for a variety of maps worldwide to track anything from elections to natural disasters to observance of constitutions to small businesses to corruption.

In the Arab world, several platforms have cropped up over the past few years and this year especially, to improve transparency and access to real-time information on everything from political violence to the weather. Here’s a look at 10 platforms working to help citizens express their voices and build better societies: 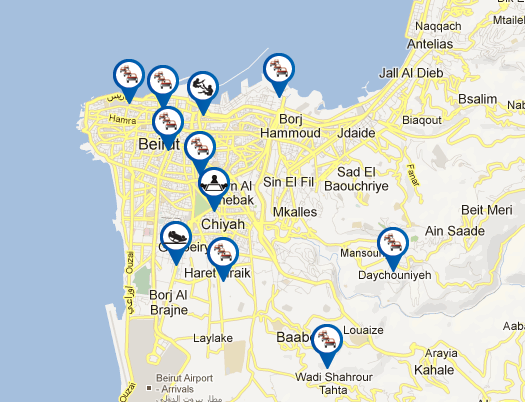 Ma2too3a!, which launched this past August, rose to popularity by tracking outbreaks of violence in Lebanon, especially following the assassination of General Wissam Al-Hassan. Now, the app is pivoting to focus on traffic jams as its team looks to expand to Egypt and the Gulf.

7arat, which is built on Ushahidi, launched in time for Jordan’s Parliamentary elections last month, to allow citizens in Jordan to report on voting fraud and election-related news or incidents, over SMS, Twitter, phone calls, and emails. Now, says founder Saeed Omar, it might expand to cover gender violence and corruption.

Zabatak is an anti-crime, anti-corruption map in Egypt that won a World Summit Youth Award in 2011 for its ambitious and apolitical work to make Egypt safe from corruption. As of today, it’s tracked over 2,000 incidents, including a few in Iraq and Saudi Arabia.

HarassMap has been made even more relevant by the recent explosion of sexual violence on Egypt’s streets. The Ushahidi-based platform, which launched in 2010, hopes to help women resist harassment in Egypt by allowing them to report incidents and feel solidarity with others.

Women Under Siege Syria works, similarly to HarassMap, to provide women in Syria with a platform for reporting sexualized violence during the ongoing conflict. As a division of the Women's Media Center's project Women Under Siege, based in New York, the Ushahdi-based platform gathers reports from SMS, email, and Twitter, under the hashtag #RapeinSyria. 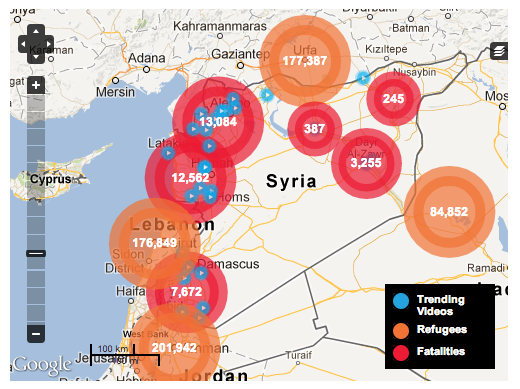 SyriaDeeply's Ushahidi-based map is designed for those who want an overview of hard-hitting facts about the Syrian conflict. The news site, developed by Armenian-American reporter Lara Setrakian, is designed to present in-depth news about the conflict in context, combining real-time updates from Twitter with historical background and long-form narratives. The map itself tracks the number of refugees, fatalies, and trending videos in Syria and surrounding countries. (SyriaTracker similarly crowdmaps a multitude of incidents, but only within Syria). 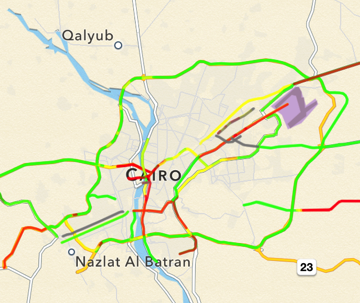 Wasalny is an Egyptian map, which, like Ma2too3a!, focuses on traffic information, but, unlike the Lebanese platform or its Cairo-based rival, Bey2ollak, it offers a heat map depicting Cairo’s traffic congestion in real time. Its sleek mobile app, that allows users to save and check favorite streets, is available for Android, iPhone, Blackberry, and Symbian.

Metwit adds a social layer to one’s daily weather update, revealing posts and photos about local conditions drawn from Instagram, Twitter, and direct updates. The Dubai-based graduate of SeedStartup might also help users connect with others when they travel, via its web and iPhone app. 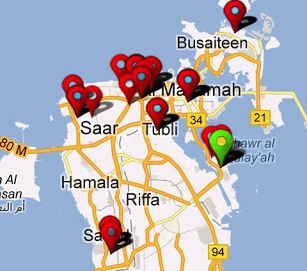 Bahrain Map is a mobile app for Android that showcases crowdsourced news and incidents including demonstrations, arrests, checkpoints, and police spottings. Designed in the context of Bahrain’s ongoing protests for reform, the map also appears to track the status of roads, not unlike Ma2too3a! 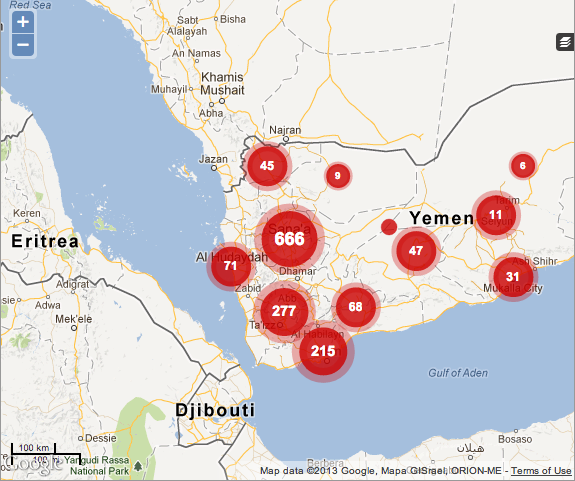 Protests in Yemen offered a look at the rise of protests in Yemen in 2011, but has now gone dormant, although its site continues to aggregate news. Perhaps a similar platform can be adapted to track localized news, to make the site sustainable beyond a specific incident.