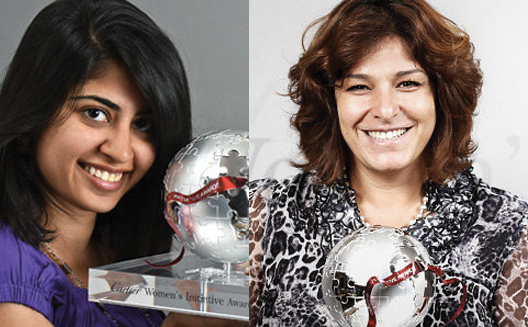 Women entrepreneurs looking for a boost with their businesses in the Middle East can apply to the Cartier Women's Initiative Awards before March 8th.

The awards, which honor a woman in each of 6 geographic regions, now including the Middle East, are an international business plan competition created in 2006 by Cartier, the Women's Forum, McKinsey & Company and INSEAD business school to identify, support and encourage projects by women entrepreneurs.

In 2011, the first Cartier Women's Initiative Award for the Middle East and North Africa was given to Rana Chmeitally of The Little Engineer, an after-school and summer activity center where enables youngsters aged 4 to 16+ can build basic engineering skills through hands-on activities.

Last year, Iba Masood was the regional laureate, winning for Gradberry, a online portal that connects students and graduates to internships and job opportunities.

For these two winners, the year-long coaching and $20,000 in funding they received has likely helped their companies scale throughout the region; this year, The Little Engineer is planning to expand into the Gulf, and Gradberry is already taking job postings from countries outside of the UAE.

Uniquely, the award will also help those who don't win; all finalists, who represent the top three ideas in each region, receive four months of coaching on their ideas to prepare for the final jury pitch at the Global Meeting of the Women’s Forum, in France in June.

To qualify, companies must be for profit, no older than 3-4 years, original, and led by a woman older than 18 years of age. Ideas are assessed for their creativity, sustainability, impact, and clarity.

Thus far, the award has coached over 100 promising female business owners and recognized 32 Laureates. For more on its impact, see the video testimonial of Antonia Sanin, the Laureate 2007 for Latin America, below. Interested founders can apply here.