At the Capital Club in Dubai Monday night, a group of inspiring entrepreneurs launched the first Social Enterprise Week in the Middle East, under the theme “Business as Unusual,” the first in a week-long series designed to showcase the region’s social business pioneers. 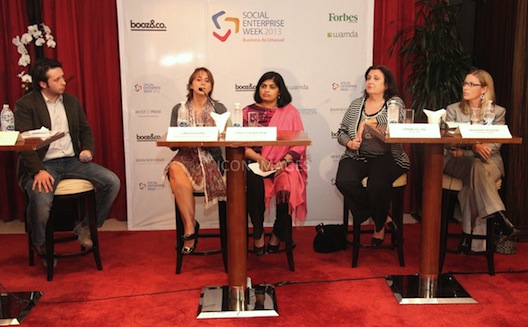 With a crowded room of high caliber entrepreneurs, social pioneers and officials, the event was inspiring on several levels.

An outstanding presentation by Booz and Company representative Mounira Jamjoom on sustainable development models in the Middle East was followed by an enriching panel on social enterprise, moderated by Wamda’s Jamil Wyne, where panelists Lina Hourani from the CSR Division of Al Ahli Holding, Janine El Tal from INJAZ UAE, Heather Henyon from Balthazar Capital, and Vineetha Mathew from the Dubai Chamber of Commerce’s Centre of Responsible Business shared their insights.

As the Middle East shifts toward more sustainable business models, Jamjoom suggested that we first define sustainability, and then determine how to achieve it, focusing on job creation, education, poverty alleviation, and careful environmental management.

“When we asked corporate leaders about responsible business, they have always talked about it as an external initiative, not as something internal. There’s definitely a gap in the region in terms of applying responsible business internally,” she stated.

Jamjoom also discussed the need to expand definitions of Corporate Social Responsibility (CSR) in order to avoid limiting its scope; it should also address poverty, unequal distribution of wealth, women’s empowerment, and other problems.

Research conducted by Booz and Company revealed that the majority of youth in GCC believe that education is the foundation of a successful life, but most of them are focused on pursuing a career in the public sector or at an international company; very hope to work at local private companies, start their own businesses or do charity work.

“Amidst this momentum in the region, entrepreneurs are just phenomenal,” declared Heather Henyon from Balthazar Capital, in the social enterprise panel. Having worked for a decade in microfinance, she believes in the rising entrepreneurial spirit and innovation currently taking place in the Arab world. She pointed that the rise of social entrepreneurship-focused spaces like Alt City in Lebanon and The Shelter in UAE helps to foster a sustainable culture.

According to Lina Hourani, the Al Ahli CSR Division empowers young students to be global entrepreneurs. She acknowledged the young entrepreneurs who inspire Al Ahli’s work, and emphasized that an upcoming social entrepreneurship event called “Business for a Cause” will work to connect businesses, educational institutions, governmental officials and others with these innovators in Dubai next week.

On the educational side, Janine El Tal stressed that “despite all of the tremendous resources and capabilities in the region, students go to school, then college, graduate, and then head into the market without a clue about what’s happening in their community.” She emphasized that schools should involve students in their communities and value volunteering from an early age, to produce active members of society.

Vineetha Mathew from Dubai Chamber also called upon educational institutions to shape the attitudes of tomorrow’s leaders and entrepreneurs, noting that Emirati youth who typically see a “rosy” picture of society could be more exposed to the nation’s and region’s pressing issues.

Panelist agreed that the regulations in the region have to change quickly, in order to accommodate emerging social businesses and entrepreneurs and alleviate the issues they face with registration, as they fall between the category of NGO and companies that offer profits to shareholders. In the UAE, support for social enterprises begins with proper legal structures!

After a big opening night with more than 100 participants, Social Enterprise Week has continued to host popular panels. In yesterday’s  session, “Green Enterprise,” attendees stayed late to debate ongoing topics, and tonight’s session, “Ethical Food Enterprise,” promises to be just as fun. Don’t miss the big closing night, “From Small steps to Big Change, and screening of a movie featuring Mohammed Yunus of Grameen at the Meydan IMAX Theatre in Dubai on Thursday.