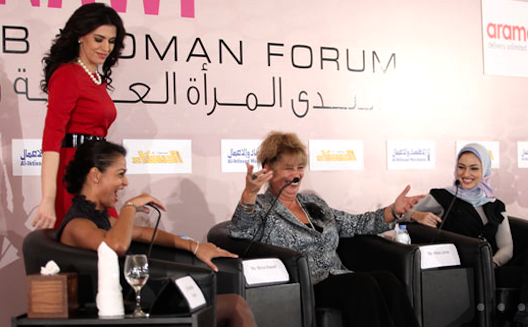 It’s no secret that as youth employment in the Middle East rises over the next decade, governments through the region will increasingly look to women to transform the region’s economic fate.

We know the standard narrative: rates of female employment in the Arab world are some of the lowest in the world. Around 32% of women are employed, as compared to around 81% of men, a discrepancy that’s twice the world average.

Women entrepreneurs are also on the rise. As of mid-2012, 35% of the entrepreneurs at Oasis500, Jordan’s biggest tech accelerator, were women, while only 24% of women are in the general formal workforce in Jordan.

These statistics may not hold at many other tech accelerators, but as a microcosm of the entrepreneurship ecosystem, this is just one of many examples exploding the myth that women are merely sidelined.

Gender equality in the workforce may not be a reality yet, but women are continuing to come together to solidify ties and push for opportunities, especially at the New Arab Woman Forum (NAWF) this March.

A yearly event, NAWF has brought women together for workshops and panels since 2007, addressing leadership in realms from media to education to beauty.

This year’s panel will focus on “Unlocking the Potential of Arab Women Entrepreneurs,” on March 1st and 2nd at the Movenpick in Beirut.

"In the middle of the transition happening in the region, we believe that entrepreneurs and the small and medium enterprises are the main drivers for a sustainable growth in the economy.” says NAWF Founder and Executive Chair Nadine Abou Zaki. “The New Arab Woman Forum will highlight the potential of women contribution in the real economy.”

At NAWF, Wamda will launch the initial segment of Wamda for Women Entrepreneurs, a roundtable series that will kick off in cities around the region this year, alongside our signature MixnMentor roadshow.

To get the conversation started, we will be asking women at NAWF to share their lessons learned, role models, and favorite advice in short video testimonials in our media booth. We’ll then be sharing these videos throughout the year as we connect women around the region.

Join us by registering for NAWF on their registration page!

To inspire women everywhere to make use of their full potential, NAWF is also recognizing exceptional Arab female figures in a variety of fields with its WOW award.

To see the nominees, who include May Habib, of Qordoba (a Wamda portfolio company), and MIT Arab Business Plan Competition and Cartier Award winner Rana Chemaitelly of The Little Engineer in the Science, Research and Technology category, head to the WOW page.

Head here to vote and here to register for NAWF, and stay tuned for more on our CoWE Roundtables.