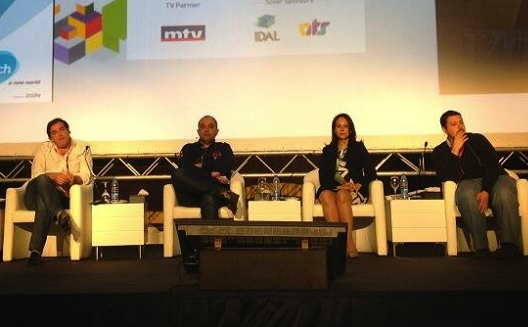 One of the most heated panels at ArabNet last week was the Mobile Music panel, which brought together 3 major music streaming services in the region: Anghami, Yala Music, and Deezer, as well as digital entertainment company Vinelab.

The first half of the session tackled paymnet issues and the debate between ownership and access models of music, while the latter half focused on details of partnerships and artist relationships.

Vinelab’s Abed Agha set the tone: “The advantage to operating in the Arab world is that we’re starting from zero, so [securing] any revenue at all for rights holders is great.”

Sources of revenue like ads, sponsorships, and subscription fees, are now part of the multiple revenue streams that pour into various stakeholders’ accounts, including the artist.

When it comes to streaming services, which are growing in the region, it's important that they find a balance between providing enough content for free to attract and retain users, while interrupting their experience just enough to encourage them to pay for the service.

“That’s how Spotify does it,” said Agha. “The ads are there not for monetization, but to disrupt the experience to get the user to pay for premium subscription.”

Both Deezer and Anghami provide premium services at a nominal fee. Yala, on the other hand, sells itself as a provider of free music; they make money through ads and sponsorships (with Pepsi at the moment). But this model won’t scale easily. After priding themselves on being a friend of free music, founder Patrick Chassany briefly mentioned that they will launch an ad-free premium service, effectively putting them in the exact same playing field as Anghami and Deezer, but with far less - and only Arabic - content.

Anghami seems to be headed in the right direction, if they deliver on big promises. From surround sound, to a web-based platform, to 4.8 million tracks by June 2013, to open API development for music discovery services, Anghami has lofty goals.

So far, the platform's competitive advantage over Deezer is a mobile platform that far surpasses Deezer’s in design, functionality, complexity and discovery tools. The user experience is also much more tailored to an Arab audience than Deezer, but they lack Deezer’s content library, especially in foreign music.

I briefly chatted with Amin Husseini of MBC after the panel and asked why they decided to partner with Anghami. “Anghami are the only ones coming out of the Middle East who were able to prove that their entire catalogue is not pirated,” he said candidly. He went on to laud the fact that Anghami is the first in the region to sign deals with all rights holders, artists, and record labels.

Although Husseini didn’t go into the details of their partnership, he did say that there will be some sort of exclusivity involved.

Deezer is new to the market. They have yet to prove themselves as a viable player in the music industry in the Arab world. They are, however, a breath of fresh air; I was surprised that their clean platform offers a huge amount of free content to the region without any licensing issues. Their web-based platform is efficient and integration with social media is seamless.

Deezer’s tailored experience for the local market is weak, however. Upon launching the app and tapping “What’s Hot,” I saw the exact same 5 artists as I did 2 months ago under “Recommended.” They are Arabic artists that I have never streamed or shown an interest in, why are they being recommended to me?

Rendering that option useless, I essentially get lost in a pool of millions of tracks, unable to sort through them unless I know exactly what I’m looking for. It’s clear that they need to settle in and adapt to the Arab market, but the sheer amount and diversity of content is what keeps me going back.

Vinelab seems to be watching the competition between streaming services, while they themselves empower artists to build and monetize their direct-to-fan relationships. They currently charge artists service fees, but will need to tap into other sources of revenue, like ads or sponsorship, to scale their revenue.

The Effect on Consumers

This competition between streaming services is healthy; the race will definitely bring promising new experiences to Arab users, but I worry that this competition could move from developing a better and more integrated user and discovery experience.

Focusing too much on a fight over content exclusivity will cost a lot of money and send the end user back to square one (i.e. piracy). This is already happening to some extent.

For instance, if I can’t find a hot new track by Joe Ashkar on Yala because of an exclusive contract with Anghami, and I can’t find a song by Ragheb Alama on Anghami because Vinelab signed an exclusivity-window agreement (even if only for 1 week) over Ragheb’s mobile app, then I could end up paying for 3 streaming services and downloading 4-5 apps just to have all the content I want. An easier alternative remains: YouTube and piracy.

Yet, the panelists seemed to agree, artists don't really abide by exclusivity contracts today anyway. While this is true now, it might not be the case once the checks start pouring into artists' accounts.

Instead of taking the time to discuss whether or not users are willing to pay for music, the panelists should have explained what their services provide that make them more desirable than piracy, in terms of content, discovery, and user experience. Consumers don’t want to hear the altruistic reasons for paying for music, helping local bands and maintaining an artist’s musical integrity, we want to know why paying for a service will bring us a better experience.