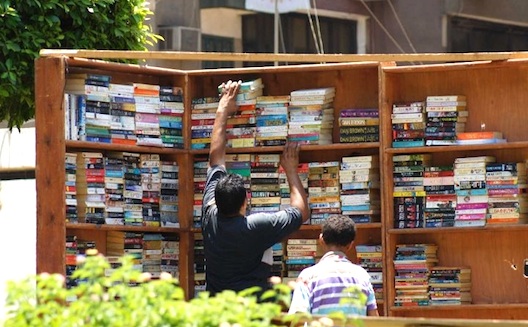 The day after the Egyptian revolution, six youths decided to start rebuilding the country their way, by creating a Culture Corner.

The idea grew out of ongoing debates that dominated public discourse; the founders resolved to spread knowledge and encourage the population to read, learn, and form constructive arguments rather than empty ideologies. “We want to foster knowledgeable, broad-minded and intellectual people,” says Asmaa El Badrawi, co-founder and head of Public Relations at Culture Corner.

Today, the initiative consists of a series of events that gather writers, thinkers, publishers, and bookstore founders in a public location where everyone is welcome.

Each event is designed to have multiple corners. The first is the reading corner, where major bookstores in Egypt like Alef, Diwan, Al Shorouk, Nahdet Masr and others have a presence and often offer books for reduced prices. Each Culture Corner also offers a “Donate a book” initiative, where people donate used books to be sold at the event or borrowed and returned by end of day.

The second corner is the debating corner, where big names like Fahmy Howeidy, Omar Taher, Sahar El Mougy, Fadel Soliman and other thinkers and writers hold discussions, speak, offer book reviews, and give trainings on how to debate.

Other corners include a kids’ corner, a music and arts corner, and an awareness corner, which might give an in-depth look at Egypt’s historic leaders and thinkers. Taking a broad vision, the Culture Corner team often invites NGOs working on culture-related issues and self-development to join their events.

The first Culture Corner took place in March 2011 in Heliopolis; following events were in Maadi, Sheration, Al Rehab and Gesr El Suez, all in Greater Cairo. With the right resources, the team could also travel outside Cairo.

Thus far, the team advertises mostly over social media, which has proven quite successful, but they also leverage printed flyers, coverage in major newspapers and on radio stations, and of course word of mouth to get their message out.

Currently, the project is completely self-funded by the founders and the team of over 30. They’ve tried to source funding, the founders assert, and yet an unregistered status, due to government restrictions, has left them with a difficult pitch.

Other aspects, like securing permits to use public places, and getting the cooperation of all of the parties involved, are also challenging.

Yet, the founders persevere. “We are trying to spread hope among Egyptians,” says El Badrawi.

With four events a year, Culture Corner hopes to fuel discussions that can shape Egypt's future. “It’s about reading, it’s about knowledge, and it is about reaching a dream of a more aware society,” says El Badrawi.