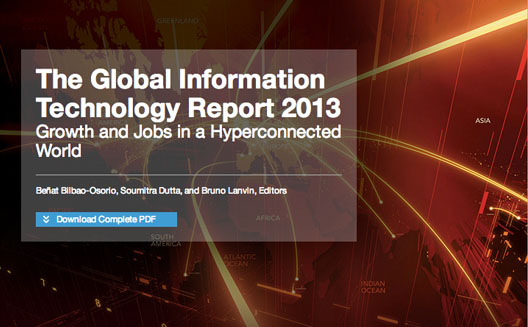 Qatar leads the Arab world in “networked readiness”, showing a huge boom in mobile broadband subscription from 9.6% to an enormous 70.3% over just the last year, according to a new report published by the World Economic Forum and INSEAD, in partnership with Strategy& and Cisco.

By evaluating the state of ICT in 144 countries, the 12th annual Global Information Technology Report (GITR) classifies countries by a Networked Readiness Index (NRI), which measures a country’s ICT infrastructure, and the usage of ICT among major stakeholders, including individuals, business, and government.

Most Arab countries maintained their NRI positions from last year, while Qatar and the UAE improved by 5 ranks to 23rd and 25th respectively; Saudi Arabia improved by 3 ranks to 31st. Political instability in Bahrain and Egypt may have affected their ranking, as Bahrain lost 2 positions moving them down to 29th and Egypt moved down one position to 80th globally.

This year, the report focused on ways to accelerate the building of digital infrastructures that lead to job creation, by looking at the impact ICT has had on employment.

Key takeaways from the report include: