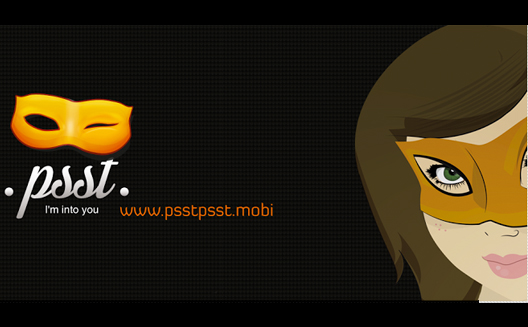 It might not surprise you that one of Lebanon's earliest mobile app development companies was built by two AUB graduates. It's almost a classic story- after graduating with degrees in Computer Communication Engineers, childhood friends Ghady Rayess and Elie Nasr, like many entrepreneurs in Lebanon, went abroad to gain more experience.

When they returned to their home country in 2009, after working at telecom operator Touch and BMW, respectively, they joined forces to launch FOO, a mobile app company that became one of the country's most successful.

What set the two founders apart was a knack for forward-thinking ideas, which can, in the Arab world, be a hindrance or a strength.. Their first product, a mobile payment app, turned out to be too advanced for the market, as banks simply refused to adopt it at the time. Later, in the context of political conflict, they built a visionary app that allowed users to send encrypted messages, yet were unable to launch it under political pressure.

In 2010, the team pivoted into entertainment, releasing one of the year's most successful applications, FOO-ME, which offered a grab-bag of distractions: free SMS, horoscopes, listings for movies and theaters in Lebanon, events, offers, restaurant deals, chat, and Sudoku. Built only for Nokia, it went viral quickly, topping registering 150,000 SMS per month, winning Arabnet's Startup Demo award that year.

It was the app launched their career; after its initial success, larger and larger clients began approaching the company to build applications, including major TV stations BBC, MBC, LBC, Arab Idol, telecom operators Touch and STC, Shankaboot, one of the most successful web-only TV series in the Arab world, Nokia, Ogilvy, Red Bull, and global tire company Bridgestone.

After several months, however, the company took it down. “It was then taken off the market because it was difficult to maintain and generate revenues from,” says Rayess.

Today, with 26 employees, FOO is continuing to build on both iPhone and Android. To create new products, they've launched an in-house incubator for innovative mobile apps.

Psst. I’m into you

Two weeks ago, FOO launched the first of their incubated apps: Psst, a daring new matchmaking application for Facebook that offers the thrill of sending anonymous messages to crushes.

Here's how it works; you register through Facebook, then you can send messages completely anonymously (from sender: "Anonymous") to anyone on Facebook, and by default you get the list of your friends you can choose from and you can Like anyone on Facebook or any of your friends. Once two users Like each other their identities are mutually revealed. "No one will know who is using the application until users connect with mutual Likes,” says Rayess.

It's not deeply complex, but the idea is that the initial pursuer might have to work to earn that first Like. Having a list of your friends appear first makes it less creepy in the beginning but knowing that you can be reached from anyone using Facebook could transform the app into a tool that brings to you creepy mesages from total strangers. And to convince users that it won't betray them too early, the app declares that “Psst will never post on your behalf."

Naturally, the app is trying to reach women, since they are considered to be hesitant when it comes to expressing their crushes. And by explicitly having a woman's face in the branding, the app targets men directly. “Women are loving it, especially because they can express themselves anonymously specifically during their teenage years,” says Nasr. “And sending secret messages anonymously is a big teaser to the receiver,” Nasr adds.

Since its launch on web and Android two weeks ago, and iPhone two days ago, focusing on the Lebanese market, the platform has gained more than 1,000 users and had over 1,000 secret messages sent, say the founders. 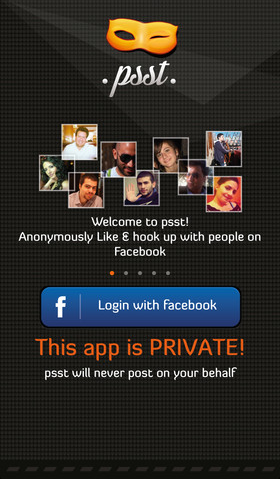 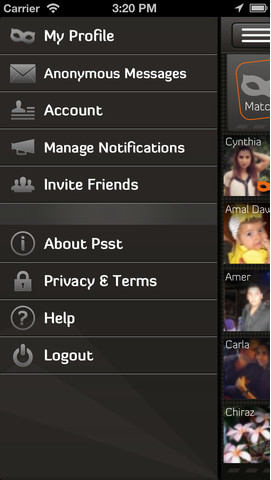 This time, the team has learned from its mistakes and started monetizing early. When users sign up, they receive 50 free secret messages; after that, they will need to purchase messages. FOO has been funding Psst so far but, says Rayess, “If it picks up, we will need to seek other sources of funding to scale.”

It's a growing market; according to market research company IBISWorld, the mobile dating market in the U.S. reported revenues of almost $213 million, up 29% from the previous year. More players are entering the market, such as BangWithFriends, a Facebook-based matchmaking platform that doesn't have its own mobile application, and Badoo, a matchmaker for strangers. In the next five years, revenue from mobile dating applications is generally expected to nearly double to more than $415 million. Could Psst be the first mobile matchmaking application to find traction in the Arabic region?