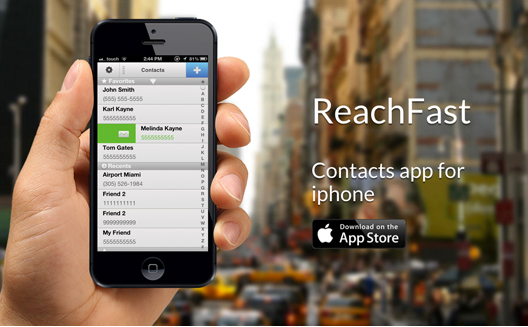 iOS application ReachFast started as a weekend vacation project, and ended up a sudden success. When Lebanese serial entrepreneurs Mark Malkoun and Emile Khattar dreamt it up, it was a bit of a side project. “We decided to take a week off and work on something light”, says Mark Malkoun, co-founder of ReachFast.

The app, which allows you to access your contacts quickly with the flick of a finger, spread like wildfire, gaining 11,000 downloads on the day of its launch, 10 days ago. It was voted app of the day on both Apps Appsfire and Appadvice and has maintained a 4.5 star rating on iTunes.

Most downloads came from Europe and the U.S., from individuals aged between 35 and 45 years old, who were mostly men, according to Malkoun. In general, it targets the impatient. “ReachFast targets mostly users who value their time”, he says.

With a simple swipe action, the application makes search even simpler than it usually is. Once the user finds the contact he or she is looking for, ReachFast offers intuitive ways to take multiple actions; a tab calls a contact, a swipe to the right sends a message, and a swipe to the left allows a user to edit, favorite or delete a contact. The app also reveals Favorite and Recent contacts next to each other on the screen to eliminate the need to change tabs.

To enhance quick access, the application also learns a user's behavior, listing frequently called contacts first, and displaying contacts in the chronological order according to when they were added, to help callers remember someone they recently met. When the app opens a contact, it suggests the latest action used as the default action; if the user last emailed a contact, it will suggest an email until another action is taken.

Soon to be launched on Android, ReachFast seems to have gained in popularity simply because it offers users ease of use on actions that they already take. "People don't want more things," Malkoun says candidly. "They want better versions of the things they already have."

As the co-founders of Sign.al, Malkoun and Khattar are also involved in creating new platforms, however; this past fall, they released Completure, a mobile application that showcases photos from citizen journalists around the world. For now, they'll be paying a bit more attention to ReachFast.

“It all happened very quickly. We decided to work on the app, and then one week later it was on the app store. Now that we noticed people like it, we will devote more time for it”, says Malkoun. ReachFast is currently available for free, but will switch to charging a fee in a month or two, he says.