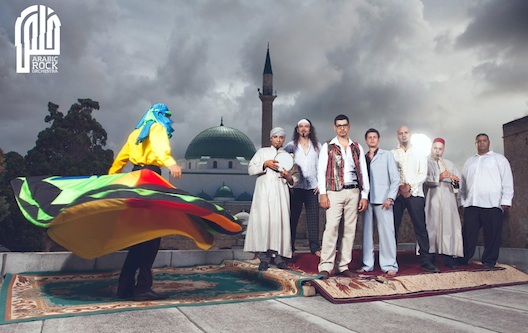 In the Middle East, indie musicians often struggle to find consistent income in a  small and fragmented market. It can be difficult to garner a lot of visibility online, but showcasing one's latest tracks has become easier with the growth of Mideast Tunes.

The site, which was founded in 2010 by Mideast Youth, a collective of progressive young Bahrainis, features a band's tracks, along with a short biography and links to its websites and social media, allowing users to browse and discover new music.

The majority of these bands might not be able to rely on online track sales to sustain themselves, as most of the music industry in the Middle East (and the world, these days) is dependent upon live shows for the bulk of their revenue, but many of the region's bands and artists are coming up with unique and inventive marketing strategies to showcase their work.

In our new Artist Entrepreneur series, we'll take a look at how creatives in the region are marketing themselves, and in the case of the music industry, how bands are surviving, what they're doing to break through the noise, and how the industry is changing with the shift towards digital consumption. Can startups save the music industry? These are trying.

Khalas is a Palestinian band that came together 12 years ago as a metal/grunge oufit singing in Arabic. Recently, they’ve rebranded themselves as an Arabic rock orchestra that combines western rock n’ roll and Arabic music.

Check out their rock adaptation of Oum Kalthoum’s song “Inta Omri” below and see more on Mideast Tunes.

Making revenue hasn't been easy. Abed Hathout, the guitarist and manager, has been hoping to quit his day job to focus on Khalas for the past 12 years, but has been unable to do so. “It’s hard here, in the Middle East, especially in Palestine,” he points out. He wants to believe than a band can live from its music, as long as it secures a deal with a record label to produce and distribute an album.

To date, Khalas has recorded several tracks, but the revenue they make from touring and merchandising has been reinvested in the band, and is nowhere near the amount necessary to record and distribute an album. That’s why the band decided to ask their fans for some help.

The band, not aware at the launch of Zoomal, a crowdfunding platform for the Arab world, set up a crowdfunding campaign on Indiegogo,  asking for US $7,000 to cover the album's production and the distribution. Perks to donors include exclusive songs, hard copies of the album, goodie bags, a Skype call with the band, and more.

During a month, the band has been heavily marketing the project, on Facebook, Twitter, Instagram, Mideastunes,  and Reverbnation. They’ve also reached out to each of their fans personally, messaging each and every one of them; at time of print, around 5% of their fans had donated, they say, reaching US $4,000, enough to cover their recording expenses.

Distributing their album, online… and offline

Not reaching their goal doesn't matter, the band members say; the campaign was a great opportunity to connect with their fans. Now, to distribute the album, the band is trying to find a medium size indie label that can help find them the attention they need.

Othewise, the band members will dig into their own savings and possibly take out a loan to raise the remaining US $3,000. Nina Zidani, the band's designer, realizes that the album might not make enough to recover the costs, but believes that it's worth it.

Part of the expense involves releasing a hardcopy. While it's easy to distribute the album on Amazon, iTunes and the like, but, the band can't imagine distributing an album online only. Hathout can't imagine not holding the album in his hands, and for Zidani, “the artwork and packaging is an extension of the music.”

"Every band should [crowdfund] at some point”

Both Hathout and Zidani think that crowdfunding is the way to go, and offer their tips for other bands trying it: