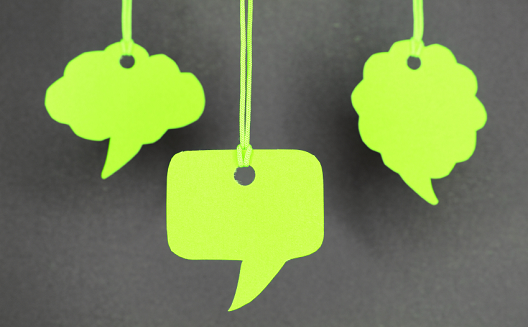 Sometimes a comment is all it takes to open new doors. Commenting on a website helped me start contributing at Wamda, connect to AngelsDen, and hopefully raise my next round of investment.

I remember the first comment I ever left; my English wasn’t that good, but I left a thought in the comments section of a Financial Times article. Nervous, I probably spent an entire hour crafting my comment to make sure I sounded at least somewhat intelligent. After I clicked ‘post’, I returned every 30 minutes to check if anyone replied to my comment; nobody did.

Even though there wasn’t much engagement, letting others know my opinion actually felt empowering. After that, I started leaving comments everywhere I visited, sometimes with humor, and other times to make a point.

Two such comments have had a big effect on my career; first the comment that connected me with Wamda and second, the message that put me in touch with AngelsDen. Here’s how:

Before joining as a regular contributor, I was a big fan of Wamda and read their articles every day, beginning in 2011. One morning I came upon a post by contributor Kia Davis entitled “9 Secrets for Replicating Silicon Valley's Success.” I loved the post and decided to leave a comment of my own, to which Nina, Wamda’s Editor-in-Chief, replied: 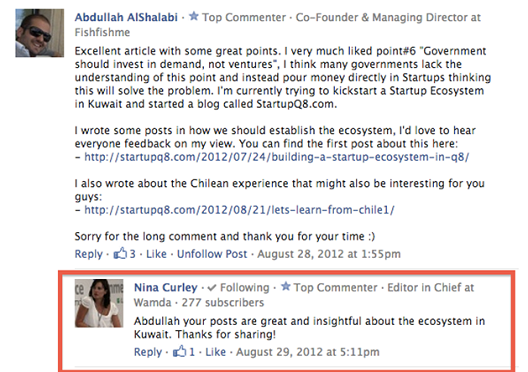 After this very brief exchange, I chatted with Nina and soon became a frequent contributor to Wamda.

[Editor's note: the main reason we brought Abdullah on board is not just because he commented, but because he offered existing posts to demonstrate his opinion about the Kuwaiti ecosystem. If you're pitching to journalists, be sure to include existing samples].

My second encounter was getting connected with global angel investing network AngelsDen. I simply wrote a short comment in another article about angel investment in Qatar:

So began my connection to the regional manager of AngelsDen – Dubai. Not only did we end up working together, but we also became good friends.

Currently, I read and leave comments on a popular European VC blog. Not many of the blog’s readers leave comments, but I try to start a conversation by leaving a comment. Now that the blog's author and I have had several exchanges and know each other fairly well, there's a better chance that if I ask him for a cup of coffee to get his advice or to pitch my startup he will say yes.

These are just three examples from my experience, but it’s important for passive readers to understand something: bloggers and writers really care about their audience.

No matter how famous they are, writers almost always read the comments people write on their posts and often reply to them. Readers themselves usually spend more time reading a comments thread than the actual articles themselves. Spammers understand this very well; they leave comments with URLs to drive traffic to their websites, and it usually works well for them.

So what makes a good comment? Strong comments should have at least one of the following characteristics:

If you haven’t been much of a commenter before, keep your comments short, frequent, and specific to a topic or author to build your reputation with a specific writer or blog community.

Hopefully these tips will inspire you to be a more active commenter online. Find some new blogs or news sources that interest you and start engaging with the community. Keep it civil and debate politely, but don’t be afraid to share your opinions with others; you may learn something new or teach someone else to think differently than they did before.