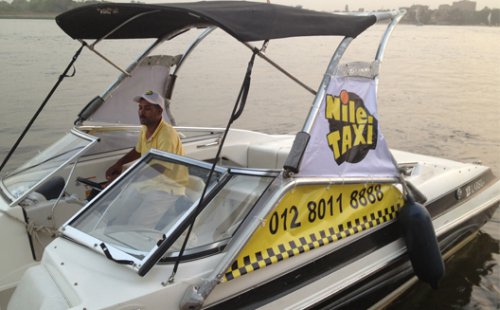 If you’re currently visiting Egypt, you may be a bit overwhelmed by the heat and congested traffic. But there’s a new was to travel across Cairo that won’t have you hopping across highway lanes and in between packed vehicles. A new way to travel the city is taking advantage of Egypt’s oldest resource, the Nile.

Nile Taxi, a maritime transportation startup bypasses some of the biggest complaints by Cairo’s tourists a locals by taking to the river to drop passengers off from one end of the city to the other. Launched in February by Magdi Kirollos, an expert in boat manufacturing, and Amr Abou Alsaoud, an experienced port manager, the team purchased four boats that each accommodate 10 passengers. They recently secured their required boat licenses to captain the ships.

Earlier this year, a World Bank study estimated that the economic costs of Cairo’s traffic equals a whopping 50 billion EGP (US $8 billion), 4% of Egypt’s the GDP. Many Egyptian tech startups have tried to address the traffic problem through carpooling, taxi rating, and crowdsourced traffic information apps, but none have been able to really make dent in the problem. But now Nile Taxi is bypassing traffic altogether.

The two partners have signed docking agreements with 22 ports so far, where passengers can board and disembark, with their main and most popular stops in front of Arkadia Mall at Bulaq, Abu al- ‘Ala, Zamalek, Giza, Garden City, El Manial, and Maadi.

The answer to Cairo's traffic problems

The project is becoming more popular among Cairo’s residents, especially commuters who take Nile Taxi to avoid traffic, hot and humid weather and to simply save time. Depending on the distance, taxi fares range from 10 to 30 EGP (US $1.43 to $4.28). The trip from the port in Bulaq al- ‘Ala to Maadi takes less than half an hour and costs 30 EGP; taking a car the same distance during the work week always takes at least an hour

Five days a week, Nile taxi offers eight regular trips per day, during rush hour in the morning and evening. The team also offers rides on weekends depending on demand thought the cost is sometimes higher than the weekday fare. Nile Taxi also offers weekly and monthly subscriptions to passengers with a 5 to 10% discount. Passengers pay when they disembark; soon they will be able to pay in advance by booking online with the upcoming launch of their website.

Starting this month, Nile Taxi will offer a new service named Downtown Ride, stopping at several ports during the day between rush hour transporting passengers short distances within a limited area, including downtown, Zamalek and other nearby locations.

At the beginning of Ramadan next month, a new Speed Boat will join Nile Taxi’s fleet, which can accommodate up to 16 people. It’s the first boat designed especially for the project by a boat factory managed by Kirollos, complete with taxi yellow paint.

Though it’s a fun ride and very convenient for employees, the service isn’t very flexible. In order to take Nile Taxi, you have to call to book your seat at a specific time and place. While we had the chance to speak with the operations manager, we heard him apologize to some callers for not being able to pick them at their desired time. But it’s understandable as the project is only in its pilot phase.

Nile Taxi also cannot be considers a private taxi, it is more a shared river bus requiring passengers to wait for others to get on and off before they continue they’re ride – perhaps they’ll set up an express boat in the future.

Farida Alfaqi who works in Cairo and is a frequent passenger of Nile Taxi, told us as she returned from work in Maadi, that her problem with car travel isn’t just the long distance and traffic, but the difficulty in finding a place to park her car especially with the high price of her office parking.

Alfaqi and her colleagues thought of developing their owna river transportation and tried the motorized “falooka” boats, but the ride took a full hour and they abandoned the idea. So when Magdi came up with his project, they all subscribed. “I go to work and get back home in a calm atmosphere and get to enjoy the natural landscapes and fresh air,” says Alfaqi.

Despite having to stop often and occasionally getting off schedule, Magdi insists that the taxi has a specific schedule like any other form of transportation. But unfortunately the culture of being on time for appointments is often missing in Egypt, even the metro and buses don’t respect schedules, probably because of the major traffic issues.

“If a passenger wants to ride at different hours, we provide an ‘on call’ service so the passenger can call us and determine their place of pick up”, adds Magdi.

As far as safety standards, Peter Wahidm, the operations manager, says that each boat is equipped with life jackets and a GPS to locate the boat in case of trouble.

Alsaoud and Kirollos are currently in talks with the River Transport Authority to allow private river transport companies and a standardized system to further develop river ports and gas stations. Kirollos doesn’t seem annoyed by the competition, which he feels only pushes him to create a better service.

“We’re still testing the waters and busy with the licenses so I cannot tell you when we will be able to cover our expenses and start generating profits. But the interesting thing is that demand was spontaneous; we haven’t even started advertising or marketing for the project we’re spending a lot on the boats in the pilot phase, working on gasoline and not solar energy. But I’m confident that it’s a promising market,” says Kirollos.