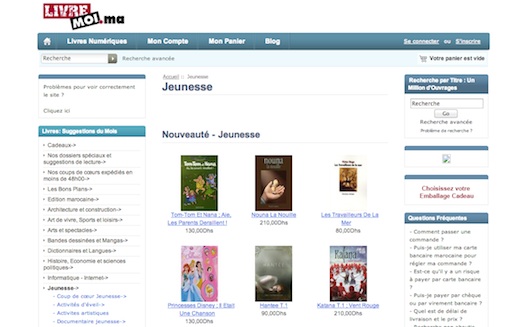 With Livremoi (a play on words between “books & I” and “ship me”), Caroline Dalimier and Mathieu Malan want to be the Amazon of Morocco.

Their vision for the platform formed in 2008, when Malan couldn’t find the books he wanted in Morocco. Local bookstores only offered best-sellers, and ordering books online was extremely difficult as the Moroccan dirham was not convertible and all of the books had to be approved by the Ministry of Communications. Even if Malan could order online, shipping would have been too expensive.

Malan believes that books and e-commerce were mean to go toghether: only an online bookstore can offer a truly comprehensive catalogue, he says, and Amazon offers proof that selling books online is a viable initial business model.

The biggest catalogue in Morocco

Livremoi claims to offer all of the 1.5 million books in French that are currently available in France, as well as 200,000  books in English offered in France and to be able to ship any on-the-demand book.

When the website launched, Malan and Dalimier had no competition in the local market; there was no single online bookstore, and the selection that most offline bookstores offered was closer to 5,000 books per bookstore, says Malan; nowhere near that of Livremoi.

Today, other players have come online, but the sector has been difficult in general, says Malan; offline bookstores tend to close their doors, and that the entrepreneurs who are trying to go online have been struggling with shipping and import/export.

Primo.ma, the only other pure online player, chose to have its own stock in Morocco but couldn't make it work and had to close. Some of the offline stores, like DSM and Livre Service, decided to come online to sell their available inventory, an option that doesn't solve the problem of books' offer in Morocco. One hybrid site, Almouggar, claims to ship both the 20,000 books its offline store has in stock, and the 500,000 books that they import, in 3 to 30 days, a rather long delivery time.

Livremoi has been able to survive where others failed thanks to three tactics:

Livremoi also does not offer cash-on-delivery, but offers payment via bank transfer, check, cash and credit card through Maroc Télécommerce, a local payment gateway. Because of their general lack of trust in online payment, customers tend to pay their first orders with transfer, check or cash before switching to online payment.

Trust in e-commerce continues to build in the country, albeit slowly. In 2012, the number of e-transactions grew to 1.25 million, a 75% increase compared to the previous year, according to Maroc Telecommerce.

Expanding in a difficult market

While Livremoi is surviving, growth has been slower than the founders thought it might. After 5 years of effort, the site only has 6,000 customers. Malan is aiming for 200,000 to 300,000.

Now, Livremoi is looking to raise their second round, to help them stay afloat until it takes off. “it’s going to big one day," says Malan; "I just don’t really know when.”

With investment, Malan plans to expand the site into other Arab countries. At the moment, however, shipping would be too expensive, and he is not in touch with publishers outside of France and Morocco.

As online shopping evolves, the site's traction may accelerate; almost 300,000 internet users have shopped online in 2012, twice as many as in 2011.Those e-shoppers are also more active than ever: 60% of them shopped online more than once in 2012, as compared to 47% in 2011, according to the ANRT, the National Agency of Telecommunication's Regulation.

And yet to continue surviving where others have failed, Livremoi may have to step up both its inventory (regional site Jamalon offers over 9 million books), and its shipping times- two weeks is still rather slow. But can they cut their shipping time without having their own stock? Primo.ma proved it was a pre-matured solution in such a small market.

The other challenge is how to get more visibility. Malan doesn't seem to have any marketing plan other than continuing what he's doing and waiting. How long can one waits for the market to be ready?

If the market is too small, then one option is to expand abroad to find more clients. Could this be a solution for Livremoi?