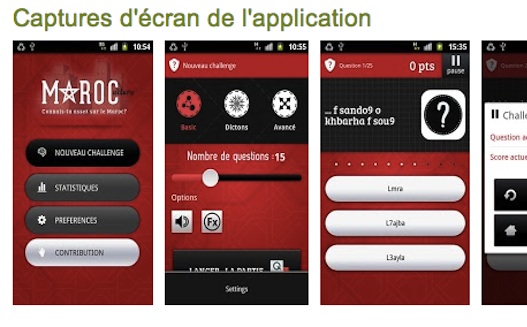 Now, for the third year in a row, local telecom Méditel is supporting that growth by working to promote Moroccan apps with its Méditel Apps Challenge.

Of the 100 Android, iPhone and Windows Phone apps submitted to the competition, Méditel named 15 finalists and then invited the public to vote for their favorite five.

The Grand Prize was awarded to Mehdi Sakout, for his Android app Maroc Culture, a game that tests knowledge of local Moroccan culture and traditions.

Second Prize went to Yassine and Med Amine Serhane, who built Morocco Smart Tour, a Windows App that lets users know what to visit in the 10 biggest Moroccan cities, depending on the time they have.

Third prize was awared to two applications: Watiqa and Ronda. Watiqa, a Windows Phone app built by Soufiane Rochdi, notifies users of the administrative procedures needed to change or renew identification such as a passport, national identity card, and drivers license. Ronda, built by Fayçal Benslimane and soon to be available on the App Store, will render the famous Maroccan card game in an iOS app.

A student prize was awareded to Oualid El Khamlish and Yassine Fraihi for their Android app Foot Alert, which alerts userswith football news and live results.

Other events have been organized to support this growing app scene, such as the Mobile Monday events and the BeMyApp event that took place this weekend.