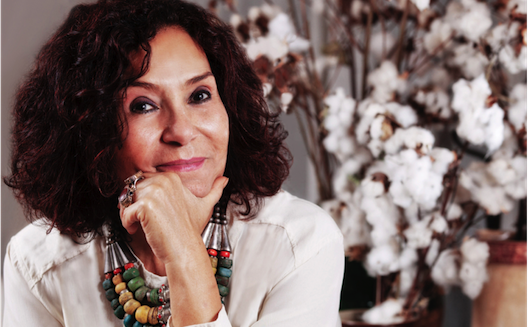 The tech startup boom and seemingly overnight successes like Facebook and Instagram have mistakenly led many to believe that success is somewhat instantaneous. We talk about exit strategies before we’ve even written our business plans. In reality, building a global brand takes years, sometimes decades.

The company has also dressed Paris Fashion Week models, as well as Queen Rania of Jordan, singer Rihanna, and British supermodel Naomi Campbell, has been featured in a variety of international publications from Vanity Fair to the New York Times, has collaborated with international brands such as Preen and Julien Macdonald, and has been invited to create collections for both the British and Louvre Museums.

But Fahmy—who in 2007 was named one of the 25 most influential businesswomen in the Middle East by the Financial Times—is no overnight success. She founded the company almost 45 years ago in 1969, having stumbled upon a book on medieval European jewelry and realized that she had found her true calling.

So how did Fahmy’s brand achieve such international acclaim and coveted status among fine jewelry labels such as Cartier and Bulgari? In addition to having the passion and commitment to persevere through struggles, and an unquenchable thirst for learning, one of Fahmy’s most valuable lessons is brand authenticity.

“One must work on making the brand's products relevant,” she says of new market expansions. “The tricky part is to create a balance between what appeals globally without compromising the brand's identity.”

Another vital element to transforming a family-owned enterprise into a competitive global business is re-structuring the company.

Over the past six years the business has evolved from an entrepreneur-run company, to one with an established and strategically structured operations team comprised of marketing, sales, design, planning and quality control departments, supported by strong financial and human resource teams.

"As retail expansions unfolded, we materialized in several local outlets, as well as standalone and distribution outlets in London, Jordan, Qatar, Bahrain and Dubai. With such rapid expansions, I realized that internal change was vital to accommodate the growth in the business,” Fahmy explains.

Now, Fatma Ghaly, Fahmy’s daughter, has taken the helm as Managing Director and is poised to expand the company’s presence in the Middle East, Europe, and North America.

A Real Entrepreneur Creates a Legacy

As the first woman to train with masters in the renowned jewelry quarter in Khan El Khalili, Fahmy gained the expertise to design the most intricate and poetic jewelry pieces, standing on her head, metaphorically speaking.

Yet she never forgot her beginnings and the challenges of a male-dominated industry, and always knew she would give back to the community and contribute to nurturing upcoming generations to develop and preserve an industry that has provided her with both a source of passion and success.

Initiated under a corporate social responsibility (CSR) umbrella in 2011, Fahmy co-founded project Nubre, meaning “Design” in Nubian, with the European Union (EU), to enhance the local culture of contemporary jewelry design through workshops.

Evolving Nubre to the next level, Fahmy established the Azza Fahmy Design Studio (AFDS) in 2013, a joint venture and partnership with Alchimia, Contemporary Design School based in Florence, Italy.

Fahmy’s vision to drive economic growth, job creation, and enhancement of related industries in the region is also channeled through the Azza Fahmy Foundation, which focuses on providing vocational education through exchange programs and development projects, which feed creative industries and facilitate knowledge-transfer across the jewelry-making industry.

Fahmy’s modus operandi is epitomized by her ‘the sky’s the limit’ attitude that has demanded she continuously challenges herself to elevate her work—and equally, her societal contribution.

I ask her what she would have done differently? “Nothing. Everything happens for a reason,” she says simply.

What strikes me is that, had we measured Azza Fahmy’s success in her first 5 years or even 10 we would not have anticipated that her business potential would flourish.

Naysayers sometimes discredit the region’s recent entrepreneurship push, saying there are no real success stories in the Arab world, meaning companies ready for scale, growth, and investment, or that few have achieved the success of our Western counterparts, barring a few household names.

I believe we will see the seeds of Arab entrepreneurship bear fruit in the coming decades—if we give them the chance to ripen, and start measuring success in lifetimes.