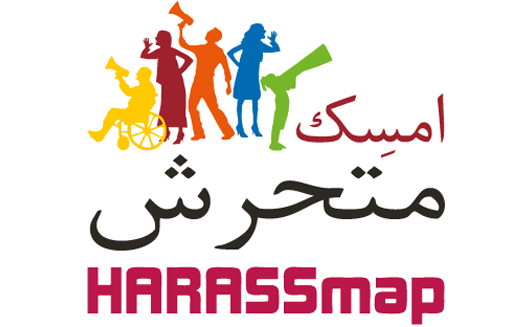 When we see major social problems around us continue to grow, we can either ignore them, deny them, or face them head on to find solutions using whatever resources we have. The volunteers at the HarassMap initiative in Egypt have decided not to sit still, taking the problem of sexual harassment head on, an issue that many have previously ignored or denied.

Inspired by previous campaigns against sexual harassment in Egypt, four young women founded the initiative in 2009. HarassMap is aimed at ending the social acceptance of harassment through various means of intervention inclduing reporting harassment incidents on the streets through several tools (SMS, on the website, or on various social media outlets), offering legal and psychological help and counseling, and conducting social campaigns on the ground, led by volunteers.

HarassMap takes advantage of the growing internet and smartphone penetration in Egypt and relies on crowd mapping where victims and volunteers can document each incident on an online map of Egypt, accessible via their website and social media.

One of the first independent initiatives to fight this phenomenon, whether in the field or online, HarassMap has set the stage for other anti-sexual harassment campaigns, including Tahrir Bodyguards and Op Anti-Sexual harassment. There has been a surge of interest in such groups, especially among Egypt’s youth, following the proliferation of sexual violence after the January 25, 2011 revolution.

Once the idea was in place, HarassMap grew quickly. Initially, harassment had to be reported to a mobile number; now HarassMap features a hotline. Reporting an incident can also be done through a simple voice recording without having to write an SMS, and without access to the internet.

Angy Ghezlan, a cofounder of HarassMap, clarifies that the available harassment map on their website doesn’t reflect the real harassment rates in any of Egypt’s regions or provinces. Although the numbers shown on the map only reflect reported cases, by those with access to technology and the ability to record their experience, the many reports that are available are certainly enough to counter any argument that sexual harassment is limited to Cairo, only happens during certain hours of the day, or is perpetrated by those of certain social backgrounds.

Volunteers ultimately seek to build social awareness about the pervasiveness of the issue through communication with the citizens of each region in Egypt to create a culture that condemns sexual harassment.

“No initiative or social entrepreneurial project can continue relying on grant funding; they must find ways to self-fund and attain financial sustainability,” admits Ghezlan. Until recently, the initiative had no outside funding; the team used resources from personal contacts and even spent their own money to keep activities going.

In an attempt to become financially sustainable, however, the HarassMap founders joined Cairo-based social enterprise incubator Nahdet el Mahrousa, under whose wing they've now been running for nearly three years. HarassMap also recently attempted a crowdfunding campaign that unfortunately didn’t make it to their ambitious $200,000 goal.

Recognizing their potential to do social good elsewhere, the HarassMap team has cooperated with groups in several other countries to adapt the initiative and offer technical help. This cooperation has led to the creation of similar initiatives in seven other countries, including in Palestine and Bangladesh. The team is in the process of developing HarassMap spinoffs in 13 additional countries, including the United States, South Africa, Japan, and Indonesia.

In addition to the ongoing “Why is he harassing?” campaign, launched on social media in 2013 in response to arguments justifying sexual harassment, HarassMap will organize school activities, starting with public schools, under the motto “safe schools,” with the goal of offering awareness about sexual harassment to students and school administrators.

With time, HarassMap hopes to be at the forefront of a societal change in the perception of the harassment phenomenon. Already, sexual harassment in Egypt is drawing greater national and international attention, a fact made possible by the efforts of several young men and women who merely started talking, working, and taking action with simple resources, refusing to bow to larger powers who continue to ignore or even deny the truth.