When international game publisher Happylatte released their first cowboy shoot'em-up game, High Noon, in 2010, its team didn't expect to become a hit in Kuwait. With studios based in Beijing, they weren't focused on capturing one particular market; yet they're still not sure why the game was a runaway hit in the tiny Gulf country.

“About 60% of our userbase is in the Middle East, with the majority in Kuwait,” says Jethro Cramp, head of publishing. "We’ve done a fair amount of research digging into this, and we’re still no clearer to a definitive answer,” says Cramp. “We just think it was probably good timing, and the game was easy to demonstrate when selling a phone.”

Although there is little concrete data, some estimate that Kuwait has a 75% smartphone penetration rate that continues to grow.

Now, the development studio has released a newer version, High Noon 2, a similar Western that pits players against each other in a duel. Using your selected weapon (shotgun, rifle, revolver, or even dynamite), a player aims with the phone and fires on the other player to deal enough damage to knock them out before they kill you. The game makes use of a smartphone’s accelerometer that requires players to hold their phone upside down while it’s in the holster before they draw it right side up and aim at their opponent by turning their phone. Tapping the screen fires a shot.

As you hunt down other players on your “s***list,” the game encourages re-matches. Players can also customize their character's gender and appearance, buying new weapons, upgrades, and clothing with currency won by defeating enemies; they can also buy more game currency via in-app purchases.

It’s a lot of fun- I’ve become slightly addicted- but the game relies on a decent internet connection, which isn’t always available here in Lebanon, and the controls can be hard to master at first.

Happylatte’s social media and communications manager, Michelle Chu, one of the company's 77 team members, thinks that the game's ranking system is what makes it popular in the Arab world.  “One of our most loyal fans in the Middle East has said that for him and his friends, the ‘reputation’ part is most important,” says Michelle Chu. Those who hold the most currency and those who have the highest bounty on their head, both earned by defeating high-level opponents, rise to the top of the ranking.

Available on Android and iOS, the game is free to play, but, as mentioned, offers in-app purchases. “Like most freemium games, it’s a very small number of people who pay, it’s only around 2%,” Cramp admits.

Although the average amount of in-app purchasing in the first version was around 30% less in Kuwait than in the U.S., the High Noon team still sees Kuwait and the Arab region as a huge source of revenue, thanks to the existence of several "whales," or players who spend thousands of dollars on in-app purchases. “We’ve had players spend over $10,000 in the game, I wish there were more of them,” jokes Cramp. “But a sizable number of people have spent over $1,000 in the game.” 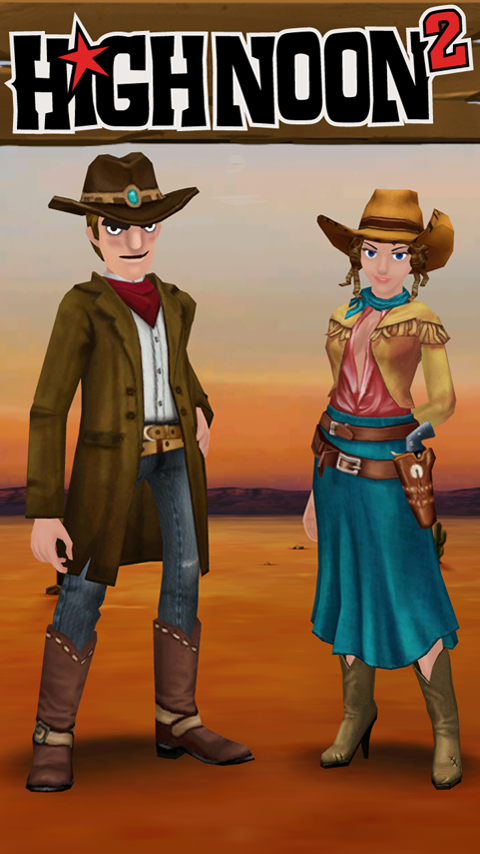 Part of the reason for the game's success is likely its addictive use of the smartphone's acceleromator, which was a conscious decision by the team to utilize the full functionality of each smarthone.

They also wanted a game that could be played in “short intense bursts” that a player could easily pick up and put down between meetings.

The team reached their goal; in 2010, the first version was among the top 10 grossing apps on iOS in 60 countries and #1 in 20 countries, hitting 2 million monthly users at its peak. It did particularly well in Kuwait, Hong Kong, Singapore, and Sweden, notes Chu; today, the game has seen over 12 million downloads.

As the game became more popular, fans repeatedly requested two things: female characters and an Android version. Over the past year, Happylatte has added these elements, as well as 3D animation, Arabic translation, and better gameplay; High Noon 2 is far superior to the original and an all-around solid game.

Perhaps developers in the region can create a hit this popular by drawing from their secret sauce, taking advantage of the smartphone's accelerometer, and leveraging the full capabiltiies of a mobile, while also making the game a very social experience by encouraging duels among friends. “There’s nothing particular players like about cowboys,” admits Cramp, but, with character customization, cross-platform multiplayer, and setting that isn't local, perhaps regional players sometimes just enjoy a nice distraction from the region's troubling headlines.