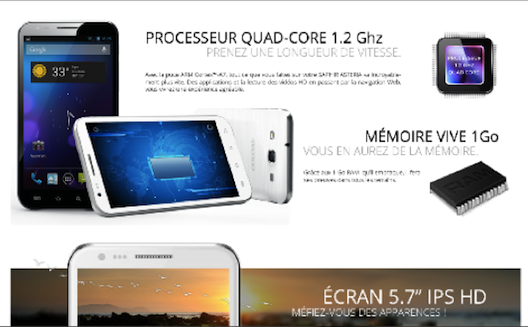 International mobile phone manufacturers keep on making the headlines: this one is suing that one over a patent, their competitor is launching a new phone without lateral buttons, another is losing money in Q4…

In Asia, people are also talking about low-cost smartphones, some of which are produced by international manufacturers, others by local brands like MicroMax in India.

In the meantime, in more mature markets, some entrepreneurs are quietly positioning themselves on this new niche; France now has Wiko. Morocco- while not necessarily a more mature market- now has Saphir Concept. They might not have the same budget not the same press coverage, but they have a growing number of customers.

This is understandable. It eliminates the need to buy from a big American, Korean (or Finnish) corporation; Moroccans can now buy Moroccan! Since late May 2013, Saphir Concept, the first Moroccan smartphone manufacturer, has debuted two models: the Asteria, its slightly higher-end phone, and then Lixus, its entry-level product.

Asteria is an Android smartphone with a comprehensive set of features, including a 5.7-inch HD screen, two 3200 mAh batteries, a 12.6 megapixel dorsal camera, and a 5 megapixel frontal camera.

The price difference is clearly a convincing factor for Saphir Concept’s customers. The Asteria was out of stock in less a month and a half, says founder and CEO Younss Fejlaoui. Fejlaoui sold all of the 1,000 he initially had produced both on his Saphir e-shop and at his showroom in Casablanca, without any marketing or ad campaigns.

Saphir is also gaining traction outside of Morocco, he says; two-thirds of their smartphones have been sold in Saudi, Egypte, Ivory Coast and Senegal.

The company has now also sold its entire first wave of Lixus and is currently selling a second series of 2,000 Asteria phone.

When living in France in 2006, Fejlaoui couldn’t afford a smartphone, but he could afford plane tickets, thanks to the rise of low-cost plane carriers; that’s when he got the idea for Saphir. By 2011, he was back in Morocco and decided to launch a Facebook page to see how people reacted to his idea. In one month, the page gathered 10,000 fans.

This was overwhelming, admits Fejlaoui, he was not ready to deal with all of the comments and criticisms he received. Few of them were even constructive, he says, but they convinced him that he had to launch fast.

In March 2012, he registered his company, but had to wait another year and half before launching, due to a lack of capital. Despite calling himself a "project creator," Fejlaoui wasn’t being really proactive, however; he refused to take a loan, and wasn’t really looking for an investor. Luckily for him, his Facebook page caught the eyes of two angel investors, one from Spain, the other from Italy, both of whom invested in Saphir earlier this year, enabling Fejlaoui to manufacture and launch the phones.

Saphir wasn't his first business; previously, Fejlaoui created Varena.fr, an online high-end iPhone cases’ store. What the two projects have in common is that they’re offering niche products that don’t require any engineering work on Fejlaoui’s side. He leaves the design and the production to sub-contractors, while he takes care of the choice and the sale.

For Saphir, Fejlaoui sends the specifications to a Chinese manufacturer and manages the commercialization, which for now simply consists of putting the two smartphones’ models on his website; Fejlaoui refuses to spend money on ads or marketing. This the core of his price-cutting strategy: no marketing budget, lean management (it's a one-man show) and a good cheap manufacturer.

After his initial success, he's branching out a bit, currently launching a third production wave, and trying to close distribution deal with large e-shops like Surcou and Jumia.

This could change the game. Seeing Wiko and Micromax’s success, and the number of Facebook fans Saphir Concept has, it’s clear that Fejlaoui has found an interesting niche. To make it work, however, he will have to step up. He needs to learn how to manage his stocks, gain visibility with large distributors, and maybe work with mobile operators.