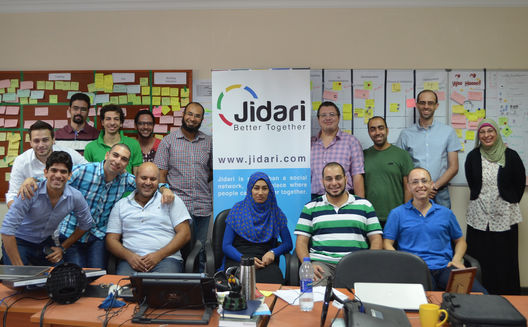 Nowadays it's safe to say everyone wants to be the next Facebook, but going head to head with the behemoth on its home turf is something even other behemoths such as Google have found extremely hard, so what chance does an Egyptian start-up have?

"We're not competing with Facebook, we're a complementary product," says Ali Zewail, the CEO and founder of Jidari, "a niche social network for anyone who's not happy with the nonspecific social networks out there."

With a name that means "my wall," the Cairo-based social network has a motto that seems appropriately significant for today: "better together." Their niche is defined by the three pillars of privacy, neutrality, and community.

A major negative issue in other social networks surrounds privacy.  So for starters, Jidari members retain the rights of anything they post - or "pulse," in Jidari lingo - with the proviso that they own its copyright in the first place.  In fact protecting privacy is so integral to the user experience in Jidari that there isn't a separate privacy settings page! Everything is cleverly designed in such a way that privacy is set at the moment you perform an action without you realising it and crucially without slowing down the user experience.  Furthermore your public and private lives are separated on the platform, and so are your professional and social lives.

"Privacy and security are so important to the concept that we employed a dedicated security professional as soon as we founded the company back in March 2012," added CTO and co-founder Mohamed Nar, who went on to explain that the founders use a NOSQL database and follow the Kanban continuous deployment development system.

Management-wise, the company is also cutting edge; for example they have an open vacation policy!  Employees can take as many days off as they like, as long as work is completed on time and days off are displayed internally in a transparent manner.

This internal transparency bodes well for the realization of Jidari's second pillar, its neutrality and fairness. While it's true that all social networks claim neutrality, we can find countless examples of users claiming unfair treatment by moderators, or perceived bias. Jidari guarantees freedom of speech to all equally, while not tolerating hate-speech, incitement, or bullying.

The third unique pillar of Jidari is effecting positive impact into the communities that use the platform. Unlike other platforms, Jidari is designed to drive real positive physical interactions between members, instead of being another talking-shop virtual experience.

Yet, the social network isn't designed to be a direct competitor of other social networks; users can pulse their updates to Twitter and soon also to Facebook.

Creating a social network is a big undertaking.  The founders worked part-time at the start using their own money while planning, creating the building blocks and fundraising. Seed money from Tamkeen Capital pushed the founders past the threshold to dedicate themselves fulltime.  Fundraising hasn't stopped since; at present they've raised over 5 million EGP (750 thousand USD) in seed money from over ten business angels. [Disclosure: At the time of writing, Tamkeen Capital was enagaging the author as a freelance consultant to aid their in-house startups.]

The team is 15 strong and working from their base in Maadi. The product now has all the standard social network functionality with their own twist, and the general look and feel is similar to facebook and Google+.  It's in beta so of course there's the odd bug, but the unique features that further set Jidari apart, such as Jidari Communities, are now starting to come online, with many more planned. "We see our membership eventually being between ten and two hundred million members," explains Zewail.

The team have created quite a few potentially patentable technologies and are looking into obtaining patents.  Anyone reading this in a similar position should note that if there's any public record of how the technology works found during the provisional patent application, the patent application will fail. Even if that public record was created by the person or organisation applying for the patent!  That's why I've made a point of not going into any detail regarding any of Jidari's unique functionality. Because Jidari's already in public beta, it might be too late to patent current aspects of their platform, but even so I didn't want to risk being the cause of the failure of any patent application process.

The road ahead for Jidari is long, but the market for a privacy-focused social network that promotes positive values is there, especially in emerging markets. With Jidari's promise that the user controls their own experience and not the other way around, there's also bound to be great interest amongst dissenting communities within mature markets. Indeed, Jidari's current marketing push targets Egypt and certain communities within the USA for those respective reasons.

Jidari's functionality is the result of its values. With that in mind, can Jidari be the new Facebook?  I think Jidari could be better, because it's designed for a post-consumerist mindset, for people who want to use a corporation's products services without feeling they themselves are that corporation's property.