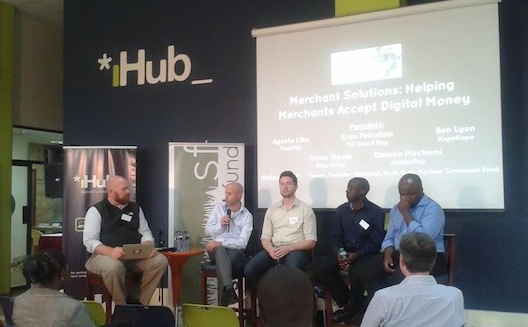 If there is one thing to know about payments in Africa, it’s that digital money is poised to disrupt transactions on the continent.

Now that mobile airtime, mobile money (like M-Pesa), gifting/rewards platforms, prepaid cards and even Bitcoin are options for exchanging value (or money) between over 1 billion consumers on the continent, everyone is scrambling to understand- and profit from- opportunity in the space.

“Some of the largest companies in the world, including Google, Ericsson, Visa, and MasterCard, are converging on East Africa,” to secure their place in one of the most “disruptive payment ecosystems on earth” according to Kopo Kopo, a merchant payments aggregator for east Africa that just secured $2.6 Million USD in series A investment.

The potential has been demonstrated with the success of mobile payment solution M-Pesa, which launched in Kenya in 2007; today, it’s captured 70% of the adult population and moves the equivalent of over 30% of the country’s GDP each year.

Now, prepaid solutions like Google’s BebaPay and Visa’s NationHela are angling to grab a slice of the market, as e-commerce players like Jumia or Closet 49 watch to see which solutions become most popular, and bold visionaries like Kipochi work to introduce digital currencies like Bitcoin to Africa.

Yet creating an ecosystem of businesses, customers, and investors for a given payment system is trickier than it seems.

“I spend maybe a third of my time assessing payment-related issues for startups or deal flow,” explains Mbwana Alliy, an investor. “So many people are asking questions [like] ‘what payments should we use?’ People are still confused.”

By inviting a wide field of players - from multinationals to Kenyan startups like PesaPal, which offers payment solutions for tickets, bills, and fees- the conference aimed to demystify complicated payment structures, exploring questions such as: What are the most effective ways to accept mobile money for your business online or offline? What are the digital money usage and payment patterns and trends of African consumers? And, what are the limits of mobile money and where do credit cards fit in the Africa payment value chain?

What became clear was that, while international payment solutions are challenged by government regulation, the opportunity is large. The trouble is, according to Alliy, “you’re just not going to get 100 PayPals. You’re only going to get a few who will win.” While it’s unclear who will come out on top in the African market, there is no shortage of innovation.

One of the hottest topics at the conference was the potential of Bitcoin and other digital currencies to disrupt- and ease- the $530 billion a year market for international remittances.

As a decentralized, peer-to-peer “cryptocurrency” for online transactions, Bitcoin’s power comes in part from its ability to circumvent government regulation, which is exactly what hinders the spread of many payment solutions around the world.

In Africa, it holds promise for assisting the large percentage of the population that forgoes formal banking. “The main reason people are unbanked [in Africa] is the gatekeepers,” like banks and credit card companies, explains Pelle Braendgaard, founder of Kipochi, which has created a mobile wallet for Bitcoin.

By using Bitcoin, Kipochi can reduce these barriers by cutting the cost of cross-boarder transactions from 12% (a typical rate at firms like Western Union) to between 1% and 3% in Africa. As long as users can find places to locally convert the digital currency to real currency, there won’t be a noticeable difference. “Bitcoin shouldn’t be viewed so much as currency, but simply a transaction platform, that allows you to ‘send and receive value from anyone anywhere in the world,’” he says.

Of course, transactions would be subject to Bitcoin’s biggest weakness: its volatility. Partly because it’s unregulated, its value can massively spike or plummet overnight.

Yet this isn’t a problem, Braendgaard explains, unless you plan to hold on to Bitcoin. If you’re just using it to make a transaction for a short period, volatility shouldn’t affect the value of your transaction. That risk would fall on the exchange bureaus who actually hold the Bitcoin, who “will charge accordingly” for that risk, he imagines.

The possibilities are enormous, but its viability depends upon local appetite. Yet Africa has proven before that it can leapfrog technology; it is after all, the continent that largely skipped landlines and went straight to mobile, and now it’s skipping computers and heading straight to tablets and smartphones.

Skipping credit cards entirely and going straight to mobile money might be a bit of a stretch, but nothing is out of the question. At AfriKoin, if there’s one thing everyone learned, it’s that amdist the confusion, there is plenty of opportunity to strike gold- whether it’s plastic, paper, or digital.